A judge in northern India has sentenced the leader of a popular sect to 20 years in prison for raping two of his female followers.

Gurmeet Ram Rahim Singh was sentenced amid intense security on Monday at a prison in the town of Rohtak, where the 50-year-old sect leader has been held since his conviction last week.

Singh was given two 10-year jail terms, which will run consecutively, for each offence.

His conviction on Friday sparked deadly violence in Haryana as his angry supporters rioted in the streets and clashed with security forces.

More than 30 people were killed, hundreds were injured and dozens were later arrested.

Police issued orders on Monday to shoot protesters on sight before the sentencing, and ordered the hearing to be carried out inside the prison where Singh was being held.

Singh’s lawyer, AK Panth, said his client was innocent and would appeal against his conviction.

Vipassana Insan, a spokeswoman for Singh’s sect, Dera Sacha Sauda, urged his followers to respect the court’s order. Earlier in the day, another spokesman for the sect had called for calm.

Utsav Singh Bains, a lawyer for the victims, said he would seek a longer sentence and asked India’s federal investigations bureau to investigate dozens more alleged cases of abuse.

“We will file two appeals shortly. One for enhancement of the punishment and another for further investigation into the case,” Bains told the AFP.

“We believe there are at least 48 more victims who were sexually abused and who may have been killed or are too scared to come out and testify against Ram Rahim.”

Al Jazeera’s Sohail Rahman, reporting from Rohtak, said about 4,000 government troops were patrolling in Rohtak and Sirsa, where Singh’s headquarters are located.

“Security forces are searching anyone who’s entering Rohtak, while Sirsa is still under curfew,” he said.

The Haryana state government, controlled by Narendra Modi‘s ruling BJP, came under fire from the opposition and a state court for failing to stop last week’s violence, our correspondent said.

A curfew was put in place on Monday in Rohtak, too.

Trains and buses leading to the town were cancelled to prevent Singh’s supporters from gathering there. Schools and offices were also shut in many places.

In a monthly radio address on Sunday, Modi, the Indian prime minister, said it was “natural to be worried” after the violence.

The rape case against Singh was brought after an anonymous letter was sent to Atal Bihari Vajpayee, the then prime minister, in 2002. The author accused Singh of repeatedly raping her.

The charges were investigated by India’s Central Bureau of Investigation, and a special CBI court convicted and sentenced Singh.

The rape conviction is not his only brush with the law.

He is awaiting trial on a murder charge over the death of a journalist, and is also under investigation by the CBI over allegations of forcing several male followers to undergo castrations to bring them closer to God.

He has denied the accusations. 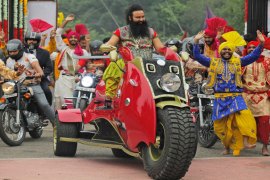 Who is Gurmeet Ram Rahim Singh?

The flamboyant Indian sect leader sentenced to 20 years in prison for raping two of his followers.