Tropical Storm Harvey has moved deeper into Texas, bringing heavy rain to the southern US state’s coastline and killing at least two people.

Throughout the region between Corpus Christi and Houston, many people fear that death toll is only the beginning.

Harvey came ashore as the fiercest hurricane to hit the United States in 13 years and the strongest to strike Texas since 1961’s Hurricane Carla, the most powerful Texas hurricane on record.

The Category 4 hurricane weakened to a tropical storm by Saturday afternoon and the National Hurricane Center said it was likely to weaken to a tropical depression later on Sunday.

The storm destroyed roofs and trees, caused tornadoes and flash floods and cut off power to nearly 230,000 people, mostly in the Houston area, on Saturday night.

“There are a number of stranded people on our streets, calling 911, exhausting needed resources. You can help by staying off the streets,” Houston Mayor Sylvester Turner said on Twitter.

Al Jazeera’s Allen Schauffler, reporting from Victoria, Texas, said: “Officials are warning of the possibility of catastrophic flooding in this region, which is just 50km inland from the coast, and down to the coast and in a wide arc all the way to Houston.”

The Harris County Joint Information Center said first responders were conducting hundreds of rescues early on Sunday morning as calls came in across the county.

One person was killed in Aransas county in a fire at home during the storm, an official said. Another dozen people in the area suffered injuries such as broken bones, another official said.

A second person died in flooding in Harris county, where Houston is located.

The storm could linger for days and unload more than 100cm of rain on cities, including Houston.

There, authorities were pleading with people not to leave their homes as a flood emergency was declared.

Rain fell on Houston at nearly 8cm an hour, leaving some streets and underpasses under water.

The many drainage channels known as bayous that carry excess water to the Gulf of Mexico were flowing freely and rising.

In Jersey Village, a city northwest of Houston, officials on Sunday recommended residents to consider evacuation, saying a bayou there may burst its banks before long.

“Certainly, if people can stay in their homes, they can do that,” Austin Bleess, the Jersey Village City manager, said.

“It’s quite possible that the streets could get impassable so we wanted to get that recommendation out.”

South of Houston, about 4,500 inmates were evacuated from three state prisons in Brazoria county because the nearby Brazos River was rising.

Some of the worst damage appeared to be in Rockport, a coastal city of about 10,000 that was directly in the storm’s path.

Rockport’s roads were a mess of toppled power poles, and wood framing from destroyed houses were strewn along a highway on the town’s southern end.

Wax told The Weather Channel that the city’s emergency response system had been hampered by the loss of mobile phone service and other forms of communication.

The Corpus Christi port was closed with extensive damage. Because the city is the third-largest petrochemical port in the nation, the authorities will be on the lookout for spills, said Captain Tony Hahn.

The turbulent weather extended into southern Louisiana, where motorists were cautioned about the potential for high water, road hazards, high winds and tornadoes. 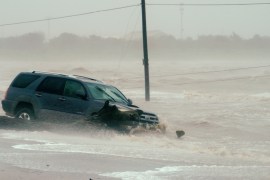 Storm downgraded to a tropical storm, but threatens US state with torrential rain as it slowly moves inland. 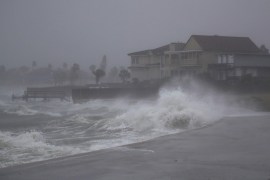 Trump signs disaster order as storm with winds of up to 215km per hour is feared worst to hit US mainland in 12 years.