The US Pacific Command said in a statement that two of North Korea’s missiles failed in flight after an unspecified distance, and another appeared to have blown up immediately.

It added that the missile posed no threat to the US territory of Guam, which North Korea had previously warned it would fire missiles towards.

Seoul’s Joint Chiefs of Staff said that that the projectiles were fired from North Korea’s eastern coast at around 6:49am on Saturday (22:19 GMT on Friday) and flew about 250km, though it did not mention any failures.

South Korea‘s presidential office held a national security council meeting to discuss the missiles, which are the first known launches since July, when North Korea successfully flight tested a pair of intercontinental ballistic missiles that analysts say could reach deep into the US mainland when perfected.

The rival Koreas recently saw their always testy relationship worsen after Pyongyang and US President Donald Trump traded warlike threats. Trump warned that he would unleash “fire and fury” if North Korea continued its threats.

The latest launch comes during an annual joint military exercise between the United States and South Korea that North Korea condemns as an invasion rehearsal, and weeks after Pyongyang threatened to fire missiles towards Guam.

Al Jazeera’s Step Vaessen, reporting from Seoul, said that investigations were still ongoing to determine exactly what kind of projectile had been launched.

“But of course it’s definitely being seen as a response to this very controversial military exercise happening here in South Korea at the moment,” she said.

North Korea’s state media earlier on Saturday said that leader Kim Jong-un inspected a special operation forces training of the country’s army that simulated attacks on South Korean islands along the countries’ western sea border in what appeared to be in response to the ongoing US-South Korea war games.

Kim reportedly told his troops that they “should think of mercilessly wiping out the enemy with arms only and occupying Seoul at one go and the southern half of Korea”.

The border islands have occasionally seen military skirmishes between the rivals, including a North Korean artillery barrage on Yeonpyeong in 2010 that left two South Korean marines and two civilians dead. 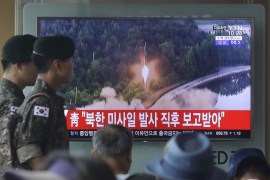 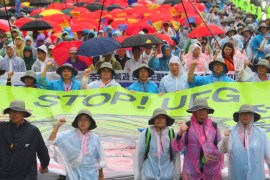 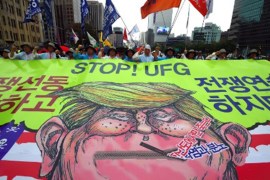