The Philippines public prosecutor’s office plans to seek murder charges against three policemen who killed a high school student, in a case that has triggered rare public outrage about the country’s war on drugs.

The death of 17-year-old Kian Loyd Delos Santos on August 16 in a rundown area of Manila has drawn domestic attention to allegations by activists that police have been systematically executing suspected users and dealers, a charge that authorities deny.

Persida Acosta, the head of the Public Attorney’s Office (PAO), said the complaint against the three anti-narcotics policemen would be forwarded to the justice department on Friday.

Delos Santos was found dead in an alley with a gun in his left hand. Police said they killed him in self-defence, but his family said he had no weapon, was right-handed and had no involvement in drugs.

Security cameras showed the officers aggressively escorting a man matching Delos Santos’ description towards the area where he was killed. The three policemen admit they were the people shown in the video, but that they were escorting another suspect, not Delos Santos.

PAO and police pathologists who did separate autopsies told a Senate hearing that Delos Santos was shot from above, from close range.

“It was cold-blooded murder, he was shot while kneeling down,” Acosta told news channel ANC. “We are here for truth and justice, so we have to file this immediately.”

The complaint, if accepted, would follow at least two cases filed last year against police over President Rodrigo Duterte’s war on drugs, which has killed thousands of Filipino – including at least 30 children, and outraged human rights groups.

Most Filipinos, however, had supported the campaign, according to opinion polls.

Several police commanders relieved of their duty over the student’s killing told a Senate inquiry on Thursday that Delos Santos was not the target of their operation, and his links to drugs were known to them only the day after his death.

Officers said they learned of his suspected links to drugs from another drug suspect and chatter circulating on social media.

Delos Santos was among more than 90 people killed last week in three nights of intensified raids dubbed “One Time, Big Time”, which had Duterte’s steadfast support. The term refers to a coordinated police drive to stamp out crime in a particular district.

The teen’s killing puts focus on Duterte’s repeated promises to police administering the crackdown that he would insulate them from any legal consequences. Critics say his rhetoric is tantamount to giving police a license to kill.

Duterte took a softer tone on Wednesday, telling police to arrest suspects and kill only if their lives were in danger, adding that he would not protect those who killed unarmed people. 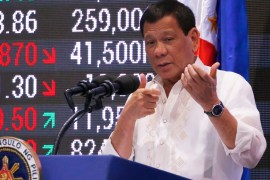 80 killed after escalation in Philippines war on drugs

Another 13 people dead in Manila overnight after police raids and vigilante attacks as death toll rises. 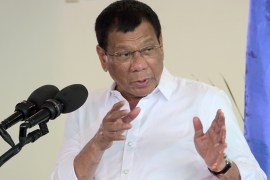