Yemen’s ex-president Ali Abdullah Saleh has staged a mass rally in the capital, Sanaa, in a major show of force amid a public rift within an alliance fighting a Saudi-led coalition for control of the country.

Thursday’s rally, which brought together some 300,000 people to celebrate 35 years since the founding of Saleh’s party, came a day after fighters loyal to the armed Houthi movement decried the ex-president as “evil”.

The Houthi rebels, who run northern Yemen together with Saleh, also condemned his description of them as a “militia” and recommended the declaration of a state of emergency and suspension of all “party activity”.

However, large crowds poured into the streets of Sanaa, waving the blue flag of Saleh’s General People’s Congress (GPC) and chanting slogans such as, “with our souls, with our blood, we serve you, Yemen”.

”We are ready to flood the front lines not by the hundreds or thousands, but by the tens of thousands of fighters who are at home,” Saleh told supporters.

“And the only thing the Houthi government has to do is to pay the salaries because we have the weapons.”

In another part of Sanaa, Houthi supporters held their own rally, chanting slogans about defeating the internationally recognised Yemeni government and its Saudi-led coalition allies.

The tactical alliance between Saleh, who was deposed five years ago, and the Houthis has often appeared fragile with both groups suspicious of each other’s ultimate motives and sharing little ideological ground.

The two factions have traded barbs on responsibility for challenges such as unemployment and mounting hunger after two and a half years of fighting the government based in the south, which is supported by the Saudi-led coalition.

OPINION: The search for common ground in Yemen

Yemen analyst Adam Baron, speaking to Al Jazeera from the Lebanese capital Beirut, said Saleh and the Houthis had an “undeniably complex relationship”.

Baron argued despite serious past grievances, the dynamics of the conflict meant the two sides “are now caught in a situation where … they are in this alliance of convenience, and in many ways, they do need each other”.

He added: “There’s plenty of things for them to fight against each other, but at the end of the day these people are still caught in the trenches against the same common enemy.

“What I wonder when I look at these tensions between Saleh and his supporters and the Houthis, are we really seeing tensions? Is this something that is largely for the consumption of the people around us, is this political theatre, or is this real tension? I think that the end of the matter is a little bit of both.”

Yemen’s conflict widened in early 2015 when the Saudi-led coalition of Arab countries stepped in with air attacks to back up the government of President Abd-Rabbu Mansour Hadi.

The air campaign has repeatedly been criticised by the United Nations for killing civilians.

One of the latest attacks killed dozens of people when a hotel was hit north of Sanaa on Wednesday, an attack investigated by the United Nations.

Stephen O’Brien, the UN humanitarian chief, described the conflict between the Saudi-backed Yemeni government and the Houthi-Saleh alliance as a “deplorable, avoidable, completely man-made catastrophe” in a briefing to the UN Security Council last week.

The UN and human rights groups accuse both sides of committing atrocities and breaking the rules of war.

Since fighting began, more than 10,000 people have been killed and millions driven from their homes.

The country is also facing a health crisis with close to 2,000 people having died from cholera since April, more than half a million people infected, and another 600,000 expected to contract the disease this year. 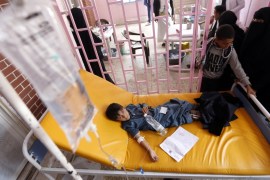 Yemen is facing a triple tragedy of famine, the world’s largest cholera outbreak, and worsening conflict says the UN. 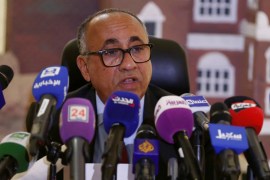