The United Nations has called for a pause in the fighting for the Syrian city of Raqqa, which is held by the Islamic State of Iraq and the Levant (ISIL, also known as ISIS) group, to let thousands of civilians escape the battle.

The Syrian Democratic Forces (SDF), an alliance of Kurdish and Arab fighters backed by US-led coalition fighter jets, has retaken 60 percent of Raqqa from the group. About 20,000 civilians remain trapped in five ISIL-controlled neighbourhoods, according to UN estimates.

Jan Egeland, head of the UN’s humanitarian task force for Syria, said on Thursday that ISIL was doing its “absolute best to use [civilians] as human shields”.

“Now is the time to think of possibilities, pauses or otherwise, that might facilitate the escape of civilians, knowing that Islamic State fighters are doing their absolute best to use them as human shields,” he said in the Swiss city of Geneva.

“People that come out cannot risk [being killed by] air raids.”

Amnesty International said in a report published on Thursday that Raqqa residents face a “deadly labyrinth”, coming under fire from all sides, as the death toll from coalition air raids and SDF shelling continued to mount.

“Things will only get more dangerous as the battle reaches its final stages in the city centre,” said Donatella Rovera, Amnesty International’s senior crisis response adviser.

“More can and must be done to preserve the lives of civilians trapped in the conflict and to facilitate their safe passage away from the battleground.”

Diplomats at the UN reacted cautiously to the call for a temporary ceasefire.

Al Jazeera’s Alan Fisher, reporting from the UN headquarters in New York City, said that even though the UN would like to set up a plan for a pause in fighting, it was an impossible task.

“How do you speak to ISIL? It is incredibly difficult, almost impossible situation to try and resolve. The United Nations acknowledge that, but they are looking for something, anything that can point them in the right direction,” he said.

On Tuesday, the UK-based Syrian Observatory for Human Rights said 42 civilians, among them 19 children, were killed in coalition-led attacks on Raqqa.

“We are the good guys, and the innocent people on the battlefield know the difference,” US Defence Secretary James Mattis said on Tuesday.

READ MORE – Syria: ‘This is about saving humanity’

But the coalition acknowledged on Wednesday that it had escalated its attacks on Raqqa, with more aircraft available since a US-backed operation successfully pushed ISIL from Mosul in neighbouring Iraq last month. 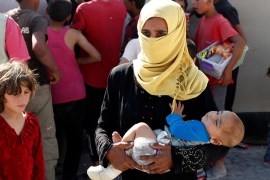 Civilians in Raqqa under fire ‘from all sides’: Amnesty

Rights group says civilians are at a greater risk as the battle to remove ISIL from its de facto capital intensifies.