Thousands of Rohingya Muslims have crossed into Bangladesh since Myanmar announced a military buildup in violence-hit Rakhine state earlier this month, according to community leaders.

Rohingya leaders in Bangladesh told AFP news agency on Wednesday that at least 3,500 had arrived in recent weeks, piling pressure onto already overcrowded refugee camps in the Cox’s Bazaar area near the Naf river that divides the two countries.

That is despite stepped-up patrols by Bangladeshi border and coast guards, who said this week they had pushed back a boat carrying 31 Rohingya, including children.

“In the Balukhali camp alone, some 3,000 Rohingya arrived from their villages in Rakhine,” said Abdul Khaleq, referring to the camp nearest the river, where most of the migrants stay when they first arrive.

Kamal Hossain, a Rohingya elder in another, camp, said nearly 700 families had arrived in Bangladesh in the past 11 days.

Many were sleeping in the open because there was no more space in the camps, he said.

On August 12, authorities in Myanmar sent hundreds of troops into Rakhine in to boost security, drawing criticism from UN special rapporteur Yanghee Lee, who warned the deployment was “cause for major concern”.

Rakhine, in northern Myanmar, has been gripped by violence since October, when armed men attacked police posts.

Following the incident, Myanmar authorities have reportedly cracked down on the Rohingya community, which the United Nations believes may amount to ethnic cleansing of the Muslim minority group.

Deen Mohammad, another Rohingya man who entered Bangladesh on August 13, said Muslim villagers in Rakhine were not allowed to visit neighbours without prior permission from the army.

The 45-year-old farmer said he left home with his family after the army killed his 23-year-old son for travelling to a nearby village.

Details of other alleged abuse last year have been recorded by the UN, which has documented mass gang rape, killings, including of babies and children, brutal beatings and disappearances. Rohingya representatives have said approximately 400 people were slain during the security forces’ operation in October.

Myanmar launched its own probe into possible crimes in Rakhine and appointed former UN chief Kofi Annan to head a commission tasked with long-simmering divisions between Buddhists and Muslims.

On Wednesday, Annan presented his report to President Htin Kyaw in the Myanmar capital of Naypyidaw. The report is expected to be made publicly available on Thursday.

Azeem Ibrahim, a senior fellow with the Center for Global Policy, told Al Jazeera that while the likely recommendations of Annan’s report won’t be controversial, the restrictions placed on the former UN chief during his investigation have been criticised by many.

“[Annan] was not permitted to look at any of the human rights violations, which would argue are the basis for the conflict and the tensions in the Rakhine district,” Ibrahim said.

He added that those who have been sceptical of the advisory commission itself argue that it is just a way for Aung Sun Suu Kyi to “pacify the global public opinion and try to demonstrate to the international community that she is doing what she can to resolve this issue, and it was just a mechanism to get sanctions [on Myanmar] lifted”.

Buddhist-majority Myanmar has long faced criticism for its treatment of the more than one million Rohingya who live in Rakhine, who are seen as interlopers from Bangladesh and are denied citizenship and access to basic rights.

They include more than 70,000 who arrived in the months that followed the crisis in October, many bringing stories of systematic rape, murder and arson at the hands of Myanmar soldiers.

But Rohingya are also increasingly unwelcome in Muslim-majority Bangladesh, where police often blame them for crimes such as drug trafficking.

Dhaka has floated the idea of relocating tens of thousands of Rohingya refugees to a remote, flood-prone island off its coast, despite opposition from rights groups.

On Wednesday, the UN refugee agency said it was “deeply concerned” by the reports of a boat carrying Rohingya being turned back.

“UNHCR is deeply concerned by this incident, which as the coastguard reported, involved women and children who said they were fleeing violence,” an agency spokesman told AFP. 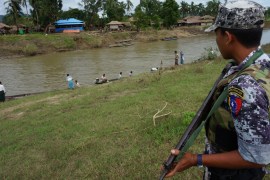