A South African model who was allegedly attacked by Zimbabwe’s first lady has asked a court to annul the government’s decision to grant Grace Mugabe diplomatic immunity.

Willie Spies, a lawyer from AfriForum – a civil rights group that has given legal backing to the alleged victim, Gabriella Engels – said on Thursday that South Africa’s foreign minister “misinterpreted the law” by “recognising the immunities and privileges” of Mugabe.

Court documents seen by AFP also ask the court to declare the diplomatic immunity decision “does not confer immunity from prosecution”.

The wife of President Robert Mugabe allegedly attacked Engels as the 20-year-old model waited with two friends in a luxury hotel suite in Johannesburg to meet one of Mugabe’s adult sons.

The attack left Engels with cuts on her head and forehead. She filed an assault charge against the 52-year-old Mugabe.

She was supposed to have reported to the police to make a statement about the incident but did not.

Police Minister Fikile Mbalula then said “a red alert” had been sent out to border police and “she is not somebody who has been running away”.

However, Mugabe flew out of South Africa on a pre-dawn flight on a presidential jet on Sunday. Hours later, the foreign ministry announced it had granted her immunity.

On Wednesday, South African MPs heckled Deputy President Cyril Ramaphosa as he answered a question on the debacle in parliament.

He said the decision to grant immunity was taken in line with “internationally recognised immunity regulations” and admitted it was “the first time we have utilised this type of convention”.

Harare has made no official comment on the issue and requests for comment from Zimbabwean officials have gone unanswered. 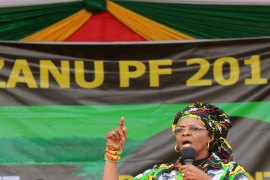 Zimbabwean president’s wife was accused of attacking a model with an electric cable in a hotel in Johannesburg.