The news prompted calls by activists on social media asking Palestinians to also be present at the site in occupied East Jerusalem on Tuesday, Palestinian news agency Wafa reported on Thursday.

Earlier, AFP news agency had quoted an Israeli official as saying that members of parliament would be allowed to visit the site known to Muslims as Haram al-Sharif and Jews as the Temple Mount in a one-day trial next week.

“In consultation with security officials, Prime Minister Benjamin Netanyahu decided to open the Temple Mount to MPs’ visits, for one day at this stage, on Tuesday, August 29,” the member of the prime minister’s office, who spoke on condition of anonymity, said.

READ MORE: The battle for al-Aqsa ‘has just started’

Netanyahu instructed police in October 2015 to bar MPs from visiting the site in the Old City of Israeli-annexed East Jerusalem, which houses the al-Aqsa Mosque complex.

It was meant to help calm unrest that erupted in part over Palestinian fears that Israel was planning to assert further control over the compound.

The site is the holiest site in Judaism and the third-holiest in Islam, and it is central to the Israeli-Palestinian conflict.

Jews are allowed to visit the compound but not pray there, and the site has been the scene of regular confrontations over any attempt to flout the rule.

Yehuda Glick, a legislator from Netanyahu’s right-wing Likud party, petitioned Israel’s Supreme Court in March against the ban on members of the Knesset, the Israeli parliament, from visiting the hilltop site.

Glick performed prayers outside al-Aqsa Mosque under the protection of Israeli police early on Wednesday, and more than 130 Israeli settlers entered the compound.

READ MORE: ‘We won’: Al-Aqsa Mosque reopened to all Palestinians

In July, Palestinians protested night and day for nearly two weeks, refusing to pray inside the compound after Israel installed metal detectors at its entrances.

They held prayers in the streets and just outside the gates to the Old City.

The new regulations came after an attack on July 14 by three Palestinian citizens of Israel, who killed two Israeli policemen in the Old City of Jerusalem.

The three men were then chased inside the compound before they were shot and killed.

In 13 days of protests, Israeli forces wounded more than 1,000 Palestinians during clashes, according to the Palestinian Red Crescent.

On July 26, Israeli authorities removed the surveillance equipment and other obstacles from the gates leading to the holy site. 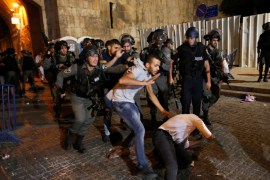 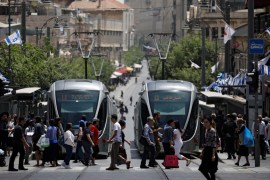