The fatal shooting on Tuesday of the teenager, Shahid Bashir Mir, led to protests on Thursday in Handwara, in the northern part of Indian-administered Kashmir.

Residents of the Daril Tarthpora village clashed with police as they demanded a criminal investigation against the soldiers involved in killing Mir.

Protesters carried Mir’s body in a coffin but refused to bury the victim until such an investigation was launched.

Kashmir police chief Muneer Khan told reporters that Mir was a civilian and no weapon was recovered from his person.

“How he got killed is a matter of investigation,” Khan said.

Indian soldiers on Tuesday had claimed that they killed a “militant” during a gunfight in a village forest.

Locals identified the young man as a student of the Degree College Handwara who they said had gone missing for two days.

Mir’s family members told Al Jazeera that he was picked up on Monday by an army convoy and had since been missing.

“We didn’t see him after that day. I went to all places, to the forests, to every village, but I couldn’t find him,” said Shahid’s father, Bashir Ahmad Mir.

“One day, I got a call from the police station to identify a body. When we went to see it, my son’s body was torn apart and his face was disfigured. We were shocked,” Mir said.

“We can’t let the youth be killed like this,” protester Nazir Ahmad told Al Jazeera. “It’s better to join militancy and die fighting than being killed like this. What was his crime, how long this bloodshed will continue?”

Human rights activist Khurram Parvez claimed that there was a financial reward for killing fighters.

READ MORE: Resistance is a way of life for Kashmiri youth

“The army does such acts for monetary benefit. They want to kill the civilians and pass them [off] as militants because they get huge monetary rewards for killing a militant in Kashmir,” he told Al Jazeera.

“Even if militancy ends here in Kashmir, the Indian army won’t stop killing people because they want to benefit from it,” he said. “They don’t want to demoralise the soldiers who are controlling the situation for them on ground.”

Nearly 70,000 people have been killed in the uprising and the ensuing Indian military crackdown. India maintains roughly 500,000 soldiers in the territory.

Anti-India sentiment runs deep among Kashmir’s mostly Muslim population and most support the rebels’ cause against Indian rule despite a decades-long military crackdown to fight the armed rebellion.

India has accused Pakistan of arming and training the rebels, which Pakistan denies.

Rebel groups have largely been suppressed by Indian forces in recent years and public opposition to Indian rule is now principally expressed through street protests. 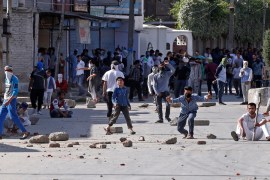 India-Pakistan tension rises as each side accuses the other of starting exchange of fire.