Civilians fleeing the battle to remove ISIL from the Syrian city of Raqqa face a “deadly labyrinth”, with fire coming from “all sides”, rights group Amnesty International has warned.

Amnesty said on Thursday that the US-led coalition campaign to drive the Islamic State of Iraq and the Levant (ISIL, also known as ISIS) group out of its de-facto capital has killed hundreds of civilians, and those remaining there face greater risk as the fight intensifies in its final stages.

“As the battle to wrest Raqqa from Islamic State intensifies, thousands of civilians are trapped in a deadly labyrinth where they are under fire from all sides,” Amnesty Senior Crisis Response Adviser Donatella Rovera said, referring to another name used for ISIL.

“Knowing that IS uses civilians as human shields, SDF and US forces must redouble efforts to protect civilians, notably by avoiding disproportionate or indiscriminate strikes and creating safe exit routes,” she said.

READ MORE: Syria – ‘This case is about saving humanity’

In recent days, the US-led coalition intensified its ferocious bombing campaign in Raqqa, more than half of which has been captured by the US-led Syrian Democratic Forces (SDP) battling ISIL.

The UN estimates that up to 25,000 civilians may remain in the city with tens of thousands of others have already fled, risking ISIL sniper fire and mines.

“We are the good guys and the innocent people on the battlefield know the difference,” US Defence Secretary Jim Mattis said on Tuesday.

But the coalition acknowledged on Wednesday it has escalated its attacks on Raqqa, with more aircraft available since a US-backed operation successfully pushed ISIL from Mosul in neighbouring Iraq last month.

“Relying on this limited methodology leads the coalition to discount a majority of reports as ‘non-credible’ or inconclusive, and to subsequently claim that civilian casualties account for only 0.31 percent of all engagements,” the report said.

‘Living or dying based on luck’

Amnesty criticised the US-led campaign for artillery and aerial bombardment on areas containing civilians and asked for an end to attacks that risk being indiscriminate.

Syrian government forces, backed by the Russian air force and Iran-backed groups, have also been advancing against ISIL in areas south of the River Euphrates that form Raqqa city’s southern edge.

Amnesty said residents had told the rights group that air raids had hit camps where people had fled the fighting.

Russia and Syria have claimed they only target fighters.

In addition to air raids, civilians in Raqqa face the threat of intense artillery fire on densely populated areas still under ISIL control.

In one incident documented by Amnesty, a dozen shells hit a single residential building, killing at least 12 people, among them a baby.

“It was indescribable, it was like the end of the world,” a witness told the rights group.

Amnesty also said ISIL was using civilians who remained in the city as human shields and reported that fleeing residents described coming under ISIL sniper fire.

“Violations by [ISIL] do not lessen the international legal obligations of other warring parties to protect civilians,” Amnesty’s Rovera said.

Even outside the city, Amnesty said, civilians were coming under attack in informal camps south of the city by Syrian regime forces using internationally banned cluster munitions.

The group urged an end to the use of explosive weapons like artillery in populated civilian areas, and called for the creation of an independent and impartial investigation mechanism to examine reported civilian casualties.

The Syrian conflict, which began with peaceful protests in March 2011 against President Bashar al-Assad, has spiralled into a multisided civil war.

The death toll stands at more than 400,000 people killed, according to UN estimates. 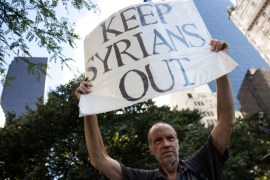 Can refugees return to Syria, as many want them to?

Countries want Syrian refugees to go back, but have they done anything to stop the Assad regime creating more refugees?