Angola’s ruling MPLA party has a substantial lead in the country’s parliamentary elections, based on provisional results, according to electoral officials.

With about 65 percent of ballots counted, the election commission said on Thursday that MPLA had won 64 percent of the votes in Wednesday’s poll, followed by the main opposition UNITA party with 24 percent.

The People’s Movement for the Liberation of Angola (MPLA) has already claimed victory, saying it won a majority and that Joao Lourenco, the country’s defence minister, would replace longtime President Jose Eduardo dos Santos.

UNITA disputed the claim, however, saying its tally showed a narrow race with only a seven percent gap.

About 9.3 million Angolans were registered to vote for the 220-member National Assembly; the winning party then selects the president.

The MPLA, which has ruled since Angola’s hard-fought independence from Portugal in 1975, had predicted it would easily win, but the preliminary result showed a fall in support compared with the last election in 2012.

In the run-up to Wednesday’s election, the two principal opposition parties, UNITA and CASA-CE, alleged the campaign had not been fairly conducted.

They complained they had been deprived of media access and voters in opposition strongholds were forced to cast their ballots at polling stations far from their homes.

The opposition parties hoped to have tapped into public anger over inflation that peaked at more than 40 percent last year, as well as low growth and high unemployment.

Dos Santos’ long reign saw the end of Angola’s bloody civil war from 1975 to 2002, and a post-conflict investment boom as the country exploited its oil reserves.

However, a slump in crude prices in 2014 hit the country’s economy hard. 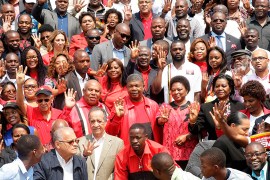 After 38 years, Angola will soon get a new president, but what is the electoral process?