UN human rights experts have called on the United States and its leadership to “unequivocally and unconditionally” condemn racist speech and crimes, warning that a failure to do so could fuel further violent incidents.

The rare “early warning and urgent action” statement, which is reserved for serious situations, was issued by the UN Committee on the Elimination of Racial Discrimination (CERD) on Wednesday.

It stopped short of criticising US President Donald Trump by name.

The US president has been under constant condemnation after he blamed “both sides” for violence that broke out at a rally, organised by neo-Nazis and white supremacists, in Charlottesville, Virginia earlier this month.

At the rally, 32-year-old Heather Heyer was killed after James Alex Fields, a man linked to white supremacists, rammed his car into a group of anti-racist protesters.

CERD said it was “disturbed by the failure at the highest political level” of the US to reject racist demonstrations.

That failure could lead to “fuelling the proliferation of racist discourse and incidents” in the United States, the statement said.

“We are alarmed by the racist demonstrations, with overtly racist slogans, chants and salutes by white nationalists, neo-Nazis, and the Ku Klux Klan, promoting white supremacy and inciting racial discrimination and hatred,” Anastasia Crickley, who chairs the UN panel, added.

The UN experts said the alleged perpetrators of the violence should be prosecuted and, if convicted, punished with sanctions commensurate with the gravity of the crime.

US officials should also “address the root causes of the proliferation of such racist manifestations, and thoroughly investigate the phenomenon of racial discrimination “, the experts said.

They added that officials should ensure that freedom of expression, association and peaceful assembly “are not exercised with the aim of destroying or denying the rights and freedoms of others”.

The US is among 177 countries to have ratified the UN pact against racial discrimination. CERD monitors compliance and reviews countries’ records every few years.

Prior to the UN warning, Trump again defended his response to the violence in Charlottesville at a rally in Arizona on Tuesday.

He accused a “very dishonest media” of mischaracterising his response to the protest.

In a toned-down speech on Wednesday in Nevada, the US president called for a “new unity”, saying that it was “time to heal the wounds that have divided” the US.

Most Americans disapprove of Trump’s response to Charlottesville and believe he is dividing the country, according to a new poll by Quinnipiac University.

Six in 10 Americans said they rejected the way Trump has handled race relations, and by a similar margin said they disapproved of Trump’s handling of the events in Charlottesville.

Meanwhile, on Wednesday, a science envoy to the US Department of State resigned over Trump’s response to Charlottesville.

Daniel Kammen, an expert on renewable energy who was appointed as a science envoy under former President Barack Obama, announced his departure in an impassioned letter that contained a hidden message that spelled out ‘impeach’ using the first letter of each paragraph.

“My decision to resign is in response to your attacks on core values of the United States,” Kammen wrote in a letter he shared on Twitter. “Your failure to condemn white supremacists and neo-Nazis has domestic and international ramifications.”

Mr. President, I am resigning as Science Envoy. Your response to Charlottesville enables racism, sexism, & harms our country and planet. pic.twitter.com/eWzDc5Yw6t

Kammen’s resignation follows that of several actors and prominent arts figures from an advisory committee to the White House. The group, which included actor Kal Penn, photographer Chuck Close and author Jhumpa Lahiri, said they could not “sit idly by … without speaking out against” Trump’s words and actions.

The president was also forced to shut down four major business advisory councils over tensions with the business community following the events in Charlottesville. 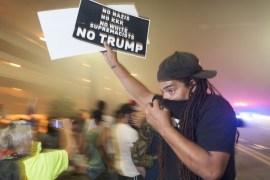