White House adviser Jared Kushner is leading a delegation to the Middle East on behalf of US President Donald Trump to discuss the possibility of resuming the Israeli-Palestinian peace process.

The talks are aimed at helping forge a path to substantive peace negotiations, but no major breakthrough is expected.

Meanwhile, Egypt’s Foreign Minister Sameh Shoukry cancelled a Wednesday meeting with the US delegation. The move came after the United States announced on Tuesday that it would punish Egypt for human rights abuses by withholding aid.

The trio has been involved in a behind-the-scenes process to help Trump broker peace between the Israelis and Palestinians, which the president has called described as the “ultimate deal”.

READ MORE: The battle for al-Aqsa ‘has just started’

They spent Tuesday in the Gulf before heading to Egypt on Wednesday.

The two Gulf neighbours are embroiled in a months-long diplomatic dispute.

A Saudi-led bloc severed ties with Qatar in June after accusing it of supporting “terrorism”, an allegation Doha strongly denies.

Kushner’s talks with Saudi and Qatari leaders focused on the Israeli-Palestinian conflict, the state news agencies of the two Gulf countries said. No mention was made of the row between Riyadh and Doha.

The US delegation also met leaders of Jordan and the United Arab Emirates. 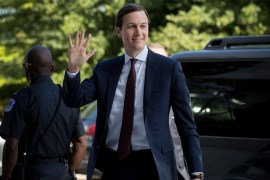 Trump son-in-law Kushner: I did not collude with Russia

Jared Kushner has testified before the Senate investigators saying “all of his actions were proper”.