Thousands of demonstrators have taken to the streets of the Philippine capital of Manila to denounce President Rodrigo Duterte’s war on drugs, as they marked the death anniversary of one of the country’s pro-democracy heroes.

Human rights advocates, youth groups, and religious communities on Monday defied a tropical storm that brought steady rain to gather at the memorial of the 1986 people power revolution to call for an end to the killings in Duterte’s war on drugs.

Amid public pressure, Duterte said on Monday there could have been abuses in his anti-drug war policy.

“There is a possibility that in some of police incidents there could be abuses. I admit that,” Duterte told reporters in Manila. “These abusive police officers are destroying the credibility of the government.”

Al Jazeera’s Jamela Alindogan, reporting from Manila, said at least 4,000 people joined in the rally, adding that a separate protest was also held in another part of the city.

Protesters are demanding an independent investigation into the summary executions and police operations that left thousands of people dead. They said the president should be held accountable for the deaths.

Demonstrators waved Philippine flags and carried banners that read: “Resist the Fascist!”, “Stop the Killings!”, and “We will fight” among others.

Monday marks the 34th anniversary of the assassination of democracy icon Benigno Aquino, who fought the 20-year dictatorship of Ferdinand Marcos. Marcos was overthrown in 1986 in a peaceful protest, which saw Aquino’s widow, Corazon, become president. Duterte is an avowed supporter of Marcos.

Leaders of Monday’s protest said the death toll in Duterte’s war on drugs has now reached 13,000 – surpassing the number of deaths of anti-government activists during Marcos’ two decades in office.

Government figures show that since Duterte took office last year, an estimated 3,451 “drug personalities” have been killed in gun battles with police up to July 26, 2017.

Another 2,000 more died in drug-related homicides, including attacks by motorcycle-riding masked gunmen and other assaults, while 8,200 homicide cases are “under investigation”.

At the rally, demonstrators also expressed outrage over the death of 17-year-old student, Kian delos Santos, who witnesses said was falsely accused of being a drug dealer and summarily executed by police earlier this week.

In another part of Manila, hundreds of marching neighbours and activists lit candles near the spot where delos Santos was shot dead during a mass raid that left at least 80 people dead in three days.

“Please be fair,” the student’s father, Zaldy delos Santos, told police. “We are the victims here. We are the ones you should help.”

He made the appeal after authorities went on the offensive to defend the police action, saying there was information indicating the boy was a drug courier and addict.

But initial forensic evidence showed there was no gunfight, and the three bullet wounds indicated the student was shot at close range in the back of the head.

According to reports, there have been at least 30 minors killed in the drug war since June 2016, when Duterte took office.

On Monday, Duterte ordered the police to take custody of officers who were involved in the killing of delos Santos, saying he would not condone abuses, and that the police officers would have to face the consequences of their actions if that is the recommendation of a formal investigation.

The head of the Public Attorney’s Office, Persida Acosta, told reporters she was recommending murder charges against the officers involved based on the initial autopsy report.

“Murder charges will most likely be filed because of the location of the entry wounds,” Acosta said in a television interview.

Neighbours, teachers and classmates of the boy also vouched for his good character. The education ministry issued a statement condemning the police action. 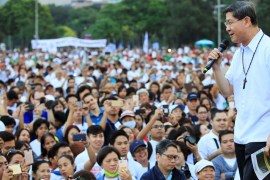