Tensions have erupted in Togo after protests against the ruling Gnassingbe family dynasty over the weekend turned deadly.

Two protesters were killed, and 12 gendarmes were wounded in Sokode, 338km north of the capital, Lome, when security forces opened fire to break up demonstrations, the security ministry said on Saturday.

Tikpi Atchadam, Togo’s opposition leader and president of the PNP party, put the death toll at seven on Saturday night.

President Faure Gnassingbe has been in power in the West African country since the 2005 death of his father, Gnassingbe Eyadema, who had been at the helm for 38 years.

Chanting “50 years is too long!”, thousands took to the streets of Lome on Saturday calling for the reinstatement of the constitution limiting terms. Security forces fired tear gas to disperse them.

“We believe this is it,” human rights activist Farida Nabourema told Al Jazeera on Sunday, adding that Togo was at a turning point.

“This is the time that this country that has been ruled by the oldest military regime in Africa decided to rise for its freedom.”

‘Togo on the move’

The hashtag #Togoenmarche, or “Togo on the move” in English, is being used to rally supporters.

Despite the threats of the minister of security, hundreds of thousand of people are in the street in #Togo to demand term limits. #Africa pic.twitter.com/hXmqNbU1wR

Democracy is not about nepotistic hegemony. Let the people speak, let peace prevail.#togoenmarche

The begining of the end for many of these lifetime rulers in #Africa. #Togo sets the scene, but surely many will follow. #togoenmarche https://t.co/iPksACwfeY

There has been no official statement by the government regarding Saturday’s violent protest.

Nabourema said: “People are still so motivated and so ready. They showed so much courage. People were pulling out bullets from their bodies. They were daring the regime and the military.”

A demonstrator who spoke to Al Jazeera said the protesters were part of a peaceful movement to reinstate a 1992 constitution that brought in notional multi-party democracy after decades of dictatorship.

But 10 years later, legislators amended it to enable Eyadema to run for another term.

Then, when he died, the military effectively tore up the constitution by installing his son as interim president instead of the head of the national assembly, as was legally required.

The protests that followed Faure Gnassingbe’s first election victory in 2005 triggered a violent security crackdown in which around 500 people were killed.

“We are protesting against the arbitrary nature of governance and denial of freedom to assemble,” PNP leader Tikpi Atchadam told Reuters news agency. 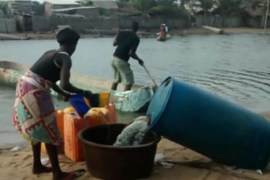 While Nigerians have had to go without fuel, some of the country’s petrol is being sold in Togo. 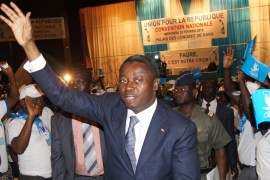