At least 10 sailors are missing after a US navy guided-missile destroyer collided with a tanker in waters east of Singapore, the second accident involving an American warship in two months.

The US Navy’s Seventh Fleet said on Monday that the USS John S McCain sustained damage on its port side aft, or left rear, after colliding with a Liberian-flagged tanker in Malaysian waters at 5:24 am local time (21:24 GMT) as it was heading to Singapore for a routine port visit.

It said five sailors were hurt, four of whom had been evacuated for treatment for non-life threatening injuries, and one who did not require further medical attention.

One of the injured sailors, Operations Specialist 2nd Class Navin Ramdhun, posted a Facebook message telling family and friends that he was OK and awaiting surgery for an arm injury.

Vessels and aircraft from the United States, Indonesia, Singapore and Malaysia were searching for the missing 10 sailors, the Navy said.

Al Jazeera’s Heidi Zhou-Castro, reporting from Washington, DC, said the destroyer was able to operate under its own power and made its way to Singapore.

As the vessel arrived at Singapore port, a photo tweeted by Malaysia’s navy chief showed a gaping hole in the McCain’s side near the waterline. Janes, a defence industry publication, estimated the hull rupture was three metres (10 feet) wide.

The US navy said in a statement that damage to the McCain’s hull flooded adjacent compartments including crew berths, machinery and communications rooms. A damage control response prevented further flooding.

President Donald Trump initially said “that’s too bad” in response to reporters’ questions about the collision, as he arrived back at the White House after a holiday.

He followed up with a tweet: “Thoughts & prayers are w/ our @USNavy sailors aboard the #USSJohnSMcCain where search & rescue efforts are under way.”

The ship is based at the fleet’s home port of Yokosuka, Japan. It was commissioned in 1994 and has a crew of 23 officers, 24 chief petty officers and 291 enlisted sailors, according to the navy’s website.

The 154-metre McCain is named after US Senator John McCain’s father and grandfather who were both US admirals.

“Cindy & I are keeping America’s sailors aboard the USS John S McCain in our prayers tonight – appreciate the work of search & rescue crews,” McCain tweeted.

It is the second collision involving a ship from the navy’s Seventh Fleet in the Pacific in two months. Seven sailors died in June when the USS Fitzgerald and a container ship hit each other in waters off Japan.

The Fitzgerald’s captain was relieved of command, and other sailors were being punished after the navy found poor seamanship and flaws in keeping watch contributed to the collision, the navy announced last week.

Graham Ong-Webb, a research fellow at Singapore’s S. Rajaratnam school of International Studies, told Al Jazeera that accidents show gaps that could be exploited by enemies of the US.

“Human error is clearly at play. These accidents have happened at the dead of night when it’s easy to be complacent and its difficult to see out at sea,” he said.

“These accidents might encourage terrorist groups, an argument several analysts and observers have said before.

“Procedures need to be tightened up. There is a lot of tension in the South China Sea and with a lot of moving vessels, this could happen again with parties that have issues with each other, and it could easily escalate.” 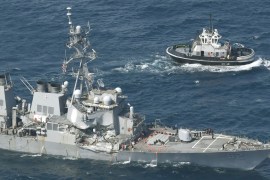 Sea and air search ends at site of collision off Japan’s coast between USS Fitzgerald and a merchant ship on Saturday.

US destroyer collides with Philippine-flagged vessel south of Tokyo Bay in Japan in rare incident on busy waterway.