The Serbian government has pulled its entire embassy staff from Macedonia amid claims over “offensive intelligence activities” against Belgrade, in a move that is likely to strain relations between the two Balkan neighbours.

Serbia’s President Aleksandar Vucic told reporters on Monday that the withdrawal from the Macedonian capital, Skopje, was made after intelligence reports of “very offensive acts” planned against Serbian interests in Macedonia.

He did not elaborate on the specific acts, adding that “everything will be much clearer” in the next 10 days.

The recall was first announced by Macedonia’s ministry of foreign affairs, which said it was “not aware of the reasons for the decision”.

OPINION: What is happening in Macedonia?

Ties between the two countries, which have had a tense relationship for years, soured in April following media reports that a Serbian intelligence officer had been in the Macedonian parliament when protesters stormed the building and beat up several deputies including Prime Minister Zoran Zaev.

Vucic insisted that Belgrade would continue to develop a good relationship with Macedonia but “these relations will have to be based on mutual respect”.

Serbian Foreign Minister Ivica Dacic told the local Tanjug news agency that some of the staff would return to Skopje next week, and Serbia’s ambassador would also go back after consultations with the president.

Though Kosovo is recognised by 114 countries, including Macedonia and 23 European Union members, Serbia’s allies – Russia and China – are still blocking its full membership of the UN.

Dacic said that Macedonia’s intention to press for Kosovo membership of UNESCO could further aggravate relations between Belgrade and Skopje.

READ MORE: Voices from Kosovo: We want ‘discussion, not violence’

Meanwhile, the Macedonian government said in a statement on Monday that it wants good relations with Serbia, but will vote in line with a majority of EU countries on Kosovo’s UNESCO membership.

Maintaining good relations with neighbours is a key requirement for the six Western Balkan states, including Kosovo, Macedonia and Serbia, to make progress towards desired EU membership.

When asked if the embassy withdrawal was related to a UNESCO bid, Vucic did not answer directly but said: “Our job is to protect the interests of Serbia without disrupting the interests of other countries”. 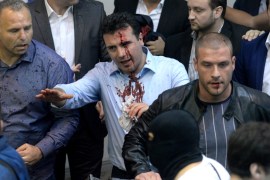 Leader of Social Democrats among the injured after violence broke out following election of ethnic Albanian as speaker. 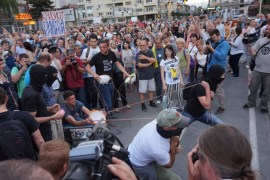 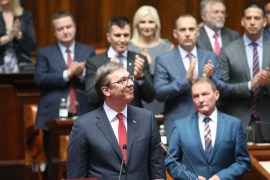 The Conservative pledges to work on regional stability and move the country closer towards EU accession.