Residents in the Indian state of Bihar are struggling to recover from the devastation caused by floods and landslides that have killed more than 250 people, destroyed crops and swept away houses and roads.

The eastern state, which was hit this month by heavy downpours that also wreaked havoc in other parts of South Asia, is facing its worst deluge since 2008, affecting nearly 13 million people spread across 20 of its 38 districts.

Ashish Ranjan, a resident of Araria district in the eastern part of the state, said the impact of the flood was massive.

“Thousands of people are living on the highway for more than a week now,” Ranjan told Al Jazeera from Araria, where 57 people have died – the highest death toll in the state.

“It has totally destroyed Araria. People here say they had never seen these kinds of floods in their lives. It’s a really bad situation here,” he said.

At least 253 people have died, and up to 152 animals have also perished, the state disaster management authority said in a statement on Sunday.

Nearly 7,000 villages have been affected by the flooding, forcing more than 400,000 people to seek shelter in 1,358 relief camps set up by state authorities.

But Ranjan said that the “government response was inadequate”, accusing authorities of not acting quick enough.

Authorities said they were busy organising relief measures and that everybody was taken by surprise by the flash floods.

Pratyaya Amrit, the principal secretary of the state disaster management authority, said the biggest challenge was to restore road connectivity. “We are working on a war footing,” he was quoted as saying by local media.

He said that halogen tablets for water purification are being distributed in the flood-affected areas.

“Rs 3,000 ($47) cash will be transferred to people’s bank account, and we are assessing the damage caused to houses and agriculture,” he said.

Along with Araria, three other districts in eastern Bihar – Purnia, Katihar and Kishangunj – bore the brunt of the flash floods that swept a region known as Seemanchal – meaning border area, due to its proximity to the border with Nepal and Bangladesh.

Nazrul Islam, 34, is from Satkua village in Kisghangunj near the Nepal border. He said 400 out of the 600 houses in his village had been affected by the floods, with 50-60 homes made from tin-sheet and bamboo destroyed.

“I have to walk for 8km to reach the nearest road,” he said.

“Milk is not available for kids, and basic amenities are lacking,” Islam told Al Jazeera, adding that relief work had started in the area, including the distribution of rice, potato, dal and salt.

“People are eating one time instead of three times a day as the remote areas still remain disconnected from the district headquarters,” he said.

Pankaj Dixit, district magistrate of Kishangunj, admitted that “connectivity was the biggest issue” as roads and telecommunication networks were cut off by the deluge.

“Nearly 200,000 families have been affected [in Kishangunj], he told Al Jazeera.

“We are working with NDRF and SDRF teams, focusing on relief work.”

The flood waters entered the district in the early hours of August 12, sweeping away houses mostly made from tin-sheet and bamboo. The region is considered one of the poorest in India.

Tanweer Alam, a businessman from Belwa village, 10km from Kishangunj district headquarters, said his business was affected badly, as cement kept in his warehouse was washed away.

Hasan Jawed, a local journalist in Kishangunj, said that nearly three million people in the region were in need of urgent help.

“No central government funds have come through. The state government and the district administration were also late in their response,” he said.

“Transportation is still in disarray; there is shortage of diesel and petrol as there is no fuel in petrol stations, while telecommunications have partially been restored,” he said.

Jawed runs a Facebook and Whatsapp group called Khabar Seemanchal that has helped in the dissemination of information regarding government relief and rehabilitation work. The district magistrate is among the 10,000 members on its WhatsApp group.

Jawed said that successive governments have failed to implement measures to check flooding in the region.

Maulana Asrar-ul-Haq Qasmi, a member of parliament from Kishangunj, said that he wrote a letter to Modi and Chief Minister of the state Nitish Kumar on August 12, asking them to send in the army. Yet, he said he had received no response.

“Had they listened to me, we would not have seen this day. So many lives could have been saved,” he told Al Jazeera by phone.

Having reached a flooded area via Nepal, the 75-year-old Congress party MP described the situation on the ground as really bad.

“Villages after villages have been washed away,” he said. 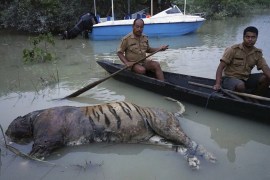 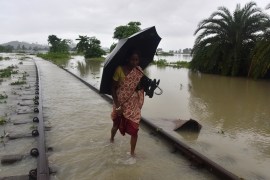