Saudis have been told to expose the names and identities of anyone showing sympathy with Qatar on Twitter, with a senior Saudi official vowing to “follow” every name reported via the social media site.

Saoud al-Qahtani, an adviser to the Saudi royal court, launched the hashtag #TheBlacklist on Friday urging Saudis to “put any names you think should be added to #TheBlacklist hashtag”.

Qahtani also tweeted that anyone who “conspires” against Saudi Arabia, the United Arab Emirates, Egypt, and Bahrain, all of which have cut diplomatic ties with Qatar, would be unable to escape trial.

Responding to Qahtani’s message, Saudis began adding the names of dissidents and activists who had expressed solidarity with Qatar.

Anwar Gargash, the UAE’s state minister for foreign affairs, was one of the first to express support for the blacklist, tweeting: “Saud al-Qahtani is an important voice … and his tweet on the ‘blacklist’ is extremely important.”

The UAE has banned all expression of sympathy with Qatar, making it a criminal offence punishable with up to 15 years in prison.

They accused Doha of funding “terrorism” – an allegation Qatar has strongly denied.

On June 22, the Saudi-led group issued a 13-point list of demands, including the shutdown of Al Jazeera, limiting ties with Iran, and expelling Turkish troops stationed in the country as a prerequisite to lifting the blockade.

The move came after the quartet cut ties with Qatar on June 5 and imposed a land, air and sea blockade on the country.

Doha rejected all the demands.

Since the diplomatic row erupted, slogans against and in support of Qatar have been among the top topics discussed on Twitter in Arabic, which is a hugely popular medium of expression in the Arab world, particularly in Saudi Arabia.

Social media users quickly took to Twitter to poke fun at Qahtani’s comments and lambast the official for the draconian measure.

Kuwaiti user @Kuwait_okk called on Twitter to ban Qahtani and accused him of violating human rights.

Another user said they would be honoured to be on such a list and wanted to be added to what they said looked like “good company”. 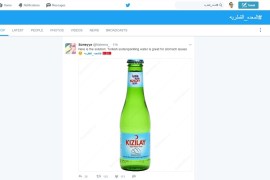 Social media users mock journalist after he says Qataris will struggle to adjust to Turkish and Iranian cuisine.