Rising floodwaters have inundated large parts of a famous wildlife reserve in northeastern India, killing more than 225 animals and forcing hundreds of others to flee.

About 15 rare rhinos, 185 deer, and at least one Royal Bengal tiger have died in the devastating floods that submerged almost the entire Kaziranga National Park in Assam state, the park’s director said on Saturday.

“Carcasses of animals were seen floating in the floodwaters. It’s a heartbreaking scene,” Satyendra Singh said.

The flooding is the worst in three decades, he said.

Meanwhile, across northern India and neighbouring Nepal and Bangladesh, the human death toll from drowning, collapsed houses, and landslides triggered by monsoon rains climbed to at least 578.

A total of 16 million people were affected by the floods.

In Bihar, the worst affected state in India, at least 153 people died as swirling floodwaters submerged hundreds of villages and swept away homes made of mud and straw.

In Nepal, floods have killed 110 people since the monsoon began in June. However, the floodwaters were receding, and no new casualties have been recorded, officials said.

More than 70 people have died in Bangladesh over the past week from drowning or snake bites.

At Kaziranga, nearly 80 percent of the 430-square-kilometer wildlife park was submerged. Some of the animals had crossed a highway and moved to higher land.

The park, a UNESCO world heritage site, is home to the largest concentration of one-horned rhinos in the world.

The Assam government had deployed security guards on the highway to protect the rhinos from poachers, said Singh, the park director.

The park lost 105 animals to floods in July. That takes the total number of animals killed so far this monsoon season to 335, he said. 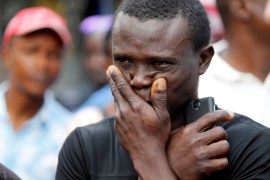 Death toll climbs to over 400 in Sierra Leone floods

Heavy rains threaten other parts of the capital Freetown as number of dead rises to more than 400. 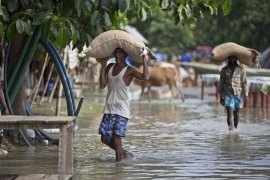