India has welcomed the United States’ blacklisting of Hizbul Mujahideen, the largest armed group in Indian-administered Kashmir, as a “foreign terrorist organisation”.

The US Department of State said in a statement on Wednesday that Washington is freezing the group’s assets to deny it “the resources it needs to carry out terrorist attacks”. The US also prohibited Americans from having dealings with the armed group.

“We welcome the designation of the Hizbul Mujahideen as a terrorist organisation,” Raveesh Kumar, India’s foreign ministry spokesman, told reporters on Friday.

“All of us are aware of what kind of terrorist activities they have conducted in the state of Jammu and Kashmir,” he said, adding it was key to “end moral, diplomatic and material support” to such groups.

OPINION: Kashmir – The communalisation of a political dispute

The reaction from India comes after Pakistan expressed anger and disappointment over Washington’s move, terming the US sanctions as “unjustified”.

“We are disappointed,” Nafees Zakaria, Pakistan’s foreign ministry spokesman, said at a media briefing in Islamabad on Thursday.

“The designation of individuals or groups supporting the Kashmiri right to self-determination as terrorists was completely unjustified,” he said.

Hizbul Mujahideen is the largest indigenous armed group fighting against Indian rule in the Himalayan territory since an armed rebellion broke out in 1989.

In June, the US designated the group’s leader, Syed Salahuddin, also known as Mohammad Yusuf Shah, as a “terrorist”.

Kashmir has been divided between India and Pakistan since the end of British colonial rule in 1947. Both claim the territory in its entirety.

IN PICTURES: Enduring the effects of partition in Kashmir

Anti-India sentiment runs deep in Kashmir’s predominantly Muslim population, and most people support the fighters’ cause against Indian rule. 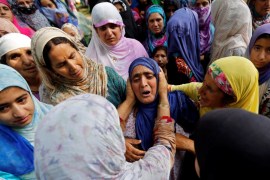 At a speech marking India’s independence day, PM says Kashmir’s conflict will not be solved by ‘abuse and bullets’.