Activists and rights groups have criticised the US federal government’s attempt to obtain information on the operators and visitors to a website that organised rallies against the inauguration of President Donald Trump earlier this year.

The web hosting company DreamHost has announced that the US Department of Justice (DoJ) served it with a search warrant on July 17 for information about the operators of the website, www.disruptJ20.org, and an estimated 1.3 million visitors.

Critics have dubbed the move an “intimidation tactic” to silence anti-fascist groups, with some calling it a disregard of the freedoms guaranteed under the First Amendment.

A hearing is slated to take place in Washington, DC’s Superior Court on August 18.

The warrant demands the IP addresses, dates and times of each visitor as well as the type of browser and operating system they used to access the website, drawing privacy concerns from activists.

The website also documents information about the prosecution of nearly 200 defendants, who were arrested in Washington, DC, and slapped with a slew of felony charges for their alleged involvement in an anti-fascist march on January 20.

Those charges, related to rioting and property damage, could land defendants in prison for upwards of 70 years.

“It might well have a chilling effect on some people,” he told Al Jazeera. “If you knew the government would find out what book you read or what movie you bought, even if it didn’t run the risk of being charged with a crime, you might not do it.”

Spitzer expressed concern that the warrant may indicate an attempt on the part of the government to obtain information about defendants that it should have had before issuing indictments against them.

“We hope that the Superior Court will not sustain this search warrant and will tell the government to find a less intrusive way to go about its investigation,” he added.

The City of Washington, DC, estimates that more than $100,000 in damage was caused by protesters who marched through the streets of the capital, smashed windows and clashed with police officers during Trump’s inauguration. Police have been accused of unnecessary and unlawful force against the rally.

Those arrested include more than 230 activists, journalists, medics, legal observers and bystanders who were kettled by police officers and whisked off. While some have reached plea agreements with the government, a handful had their charges dropped.

Sam Menefee-Libey, an activist with DC Legal Posse, a group that supports the Inauguration Day defendants, said the warrant is the latest “intimidation tactic” as part of the government’s ongoing campaign to dissuade anti-Trump activists.

That campaign, he said, includes confiscating the defendants’ telephones and issuing subpoenas for access to their social media accounts.

“It’s a fishing expedition,” Menefee-Libey told Al Jazeera. “It’s clear that they don’t currently have the evidence to back the outrageous charges against people.”

DreamHost announced that it was fighting the warrant in court in a blog post on Monday.

“The internet was founded – and continues to survive, in the main – on its democratising ability to facilitate a free exchange of ideas,” the tech firm said on the blog.

“Internet users have a reasonable expectation that they will not get swept up in criminal investigations simply by exercising their right to political speech against the government.”

The website-hosting company said it intends to “take whatever steps are necessary” to prevent visitors and users from being exposed to what it argues is an unfair and illegal attempt to obtain their private information.

In a motion filed on July 28, US Attorney Channing Phillips said: “That website was used in the development, planning, advertisement and organisation of a violent riot that occurred in Washington, DC on January 20, 2017.”

At the time of publication, the DoJ had not replied to Al Jazeera’s request for a comment.

Mark Rumold, a senior staff lawyer at the Electronic Frontier Foundation, a group that advocates online civil liberties, said he could not be sure if the warrant was politically motivated.

“But what’s clear is an absolute disregard of the significant First Amendment interests – to associate and advocate for political change without government interference – by Department of Justice, which is what makes this warrant so troubling and unconstitutional,” he told Al Jazeera.

Pointing to a series of far-right rallies that turned violent across the country in recent months, DC Legal Posse’s Menefee-Libey argued that the warrant exposes the government’s “double standard” in seeking out and surveilling anti-fascists rather than far-right activists.

James Alex Fields, a 20-year-old Ohio resident who marched during Charlottesville’s Unite the Right rally with a neo-Nazi group, is accused of ploughing his car into a crowd of anti-racist protesters and killing 32-year-old Heather Heyer.

In May, Jeremy Christian, who had been photographed performing Nazi salutes at a far-right demonstration, allegedly killed two men and injured another when he stabbed them as they attempted to prevent him from harassing a group of Muslim girls on a train in Portland, Oregon.

Menefee-Libey argued that far-right violence has not attracted the same type of government crackdown that anti-fascists, including the Inauguration Day defendants, have endured.

“We’ve seen both police and prosecutors go after anti-fascists in a way that they simply have not gone after fascists,” he said.

“This is despite the fact that [far-rightists] incite violence and advocate a political practice of genocide and hate.” 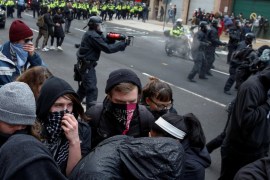 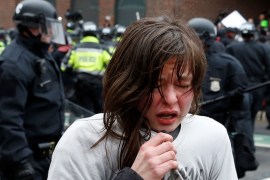 An independent photojournalist says it ‘felt like rape’ as officers subjected him to a cavity search while laughing. 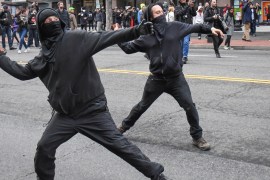