Authorities in Sierra Leone warned on Thursday of danger from more mudslides as a large crack has opened on a mountainside in the capital, Freetown.

The government said the priority was to evacuate people from areas still under threat from mudslides and floods as more rain is forecast for this week.

“The rains are still pending, and there is a possibility that we will have another incident,” Zuliatu Cooper, deputy minister for health and sanitation, told The Associated Press news agency.

“We would rather have structures falling down without people in them,” Cooper said.

At least 400 people are confirmed dead after Monday’s mudslides and flooding in and around Freetown. More than 100 of those who died are children as devastating mudslides struck before dawn

Authorities are still looking for the more than 600 still unaccounted for in one of Africa’s worst flood disasters in living memory.

Aid agencies warned that corpses trapped in the mud are likely to contaminate water sources and cause outbreaks of disease, but continuous rain has made the search difficult and dangerous.

The UN said 4,000 people are affected by the mudslides and flooding.

The UN Office for the Coordination of Humanitarian Affairs (OCHA) said 3D mapping of affected neighbourhoods was taking place around Sugar Loaf mountain, which partially collapsed on Monday, and said voluntary evacuations might extend to more areas, potentially increasing the number of displaced. 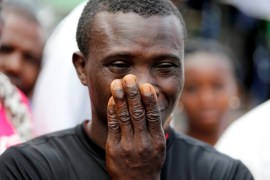 First mass burial to take place on Thursday after floods and mudslides kill more than 400 people in Sierra Leone. 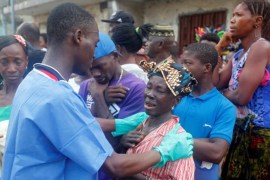 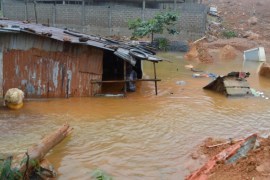 On August 14 a mudslide killed hundreds on the outskirts of Sierra Leone’s capital Freetown. Here is what we know.