United Nations Secretary-General Antonio Guterres has said it was time to “dial down rhetoric and dial up diplomacy” on North Korea, offering to help broker talks with the parties involved in the dispute.

“My good offices are always available – and I conveyed this message yesterday to the representatives of the six-party talks,” Guterres told reporters on Wednesday amid growing tensions on the Korean Peninsula since Pyongyang conducted ballistic missiles test last month.

“The solution to this crisis must be political. The potential consequences of military action are too horrific to even contemplate.”

The UN chief’s comments come on the day China warned North Korea and the United States to “hit the brakes” on threats and actions, and work towards a peaceful resolution of their dispute.

Guterres said he also told representatives from the US, China, South Korea, Japan and  Russia about the offer.

In the wake of its recent ballistic tests, North Korea was slapped with UN sanctions – a decision Pyongyang dubbed a “violent violation of North’s sovereignty”.

North Korea’s Foreign Minister Ri Yong-ho said in a statement on August 7 that Pyongyang was ready to give the US a “severe lesson” if Washington took military action.

Meanwhile, China’s Foreign Minister Wang Yi, in a phone conversation with his Russian counterpart Sergey Lavrov on Tuesday, said the two countries should work together and contain tensions.

Earlier on Wednesday, President Donald Trump praised North Korean leader Kim Jong-un’s apparent decision to back away from a conflict, after a recent escalation in the rhetoric and threats between the two sides.

Kim had delayed a decision on whether to go ahead with an attack on the US territory of Guam in the Pacific, according to a statement on North Korean state media on Tuesday.

“Kim Jong-un of North Korea made a very wise and well reasoned decision. The alternative would have been both catastrophic and unacceptable!” Trump tweeted.

A war of words erupted between the US and North Korea last week after Trump threatened “fire and fury” against the reclusive regime.

Pyongyang responded by saying it was considering an attack against Guam.

The Tuesday report by North Korea’s KCNA said that, while Kim was ready to fire missiles at Guam, he would wait to “watch a little more the foolish and stupid conduct of the Yankees”.

Such a move would lead to an arms race in Asia and weaken international efforts against North Korea’s nuclear programme, Lee told broadcaster YTN News.

“It will result in undermining the justification for [North Korea’s] denuclearisation and accelerate nuclear armament” in the region, he said. 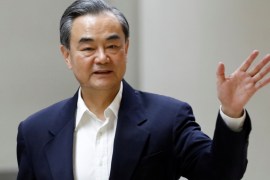