Venezuelan President Nicolas Maduro has called for military exercises after US President Donald Trump’s threat of a possible armed intervention in the country.

Speaking on Monday, Maduro insisted he still wanted to hold talks with the US leader whose threat of a “military option” came amid violent protests in Venezuela.

Maduro told supporters in Caracas to prepare for an “imperialist” invasion while US Vice President Mike Pence sought to calm concerns in the region about Trump’s talk, promising a peaceful solution to Venezuela’s “collapse into dictatorship”.

“President Trump has made it very clear that we will not stand by while Venezuela collapses into dictatorship,” Pence said in Cartagena, Colombia, according to Reuters news agency.

“A failed state in Venezuela threatens the security and prosperity of our entire hemisphere and the people of the United States of America.”

Venezuela’s Vice President Tareck el-Aissami condemned the visit by his US counterpart to neighbouring Colombia.

Maduro is struggling with a faltering economy at home and increasing diplomatic isolation abroad. Trump’s comments on Friday have fuelled long-standing accusations that the US is preparing a military attack.

“Everyone has to join the defence plan, millions of men and women, let’s see how the American imperialists like it,” Maduro told supporters, urging them to join the two-day operation on Aug 26 and 27 involving both soldiers and civilians.

Thousands of government supporters rallied in Caracas where they denounced Trump’s suggestion of armed force to resolve Venezuela’s crisis.

More than 120 people have been killed since anti-government protests began in April, driven by outrage over Venezuela’s economic crisis and Maduro’s creation of a legislative superbody that critics say is dictatorial.

Maduro said Trump’s advisers had confused him about the true situation in Venezuela. 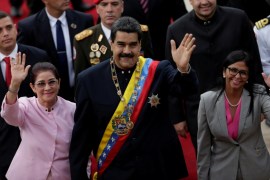 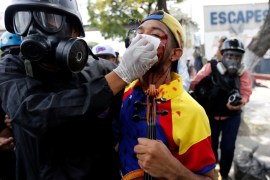