The president of Sierra Leone says his country needs “urgent support now” for thousands of people affected by flash flooding and mudslides in and around the capital Freetown.

Ernest Bai Koroma fought back tears on Tuesday as he said at a news conference in the hilltop community of Regent that the disaster “was overwhelming”.

“Entire communities have been wiped out,” Koroma said at the site where heavy rains streaming down the hill caused a landslide and engulfed homes three or four storeys high on Monday, many of them built illegally.

According to authorities, more than 300 people were killed, and many were trapped under tonnes of mud as they slept.

Gaston Slanwa, the representative for Sierra Leone’s Christian charity Tearfund, told Al Jazeera from Freetown that there was a need for food, shelter, blankets and safe water among other things.

“We are going to open churches to provide shelter. We hope to provide food, clothing, blankets and water. And we are working with other agencies to see how best we can address the situation,” he said.

He also said that there was a risk of further flooding that was adding to the worry in the area.

The UK and Israel said they were sending aid, including clean water, medicines and blankets, as quickly as possible.

Sulaiman Parker, the environmental protection officer on the Freetown City Council, said bodies would be buried in the next 48 hours.

The Red Cross has estimated that 600 people were still missing and it was struggling to bring enough equipment to the site to excavate those buried deep in the mud.

“I have never seen anything like it,” said Abdul Nasir, programme coordinator for the International Federation of Red Cross and Red Crescent Societies.

“A river of mud came out of nowhere and swallowed entire communities, just wiped them away. We are racing against time, more flooding and the risk of disease to help these affected communities survive and cope with their loss.”

The government has promised relief to the more than 3,000 people left homeless, opening an emergency response centre in Regent and four registration centres.

Abibatu Kamara, a mother of three who spent the night on her neighbours’ veranda, said the government response so far had been absent.

“We have not received any food or blankets since the disaster occurred yesterday,” she told AFP news agency. 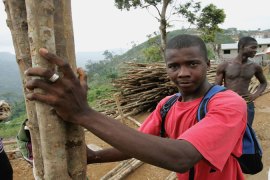 In Freetown, population growth has people building homes on steep ground, which may lead to devastating consequences.

Hundreds of people are feared dead after devastating mudslide on the outskirts of the capital, Freetown.