Maldives President Abdulla Yameen has apparently admitted receiving bags of stolen cash at his private residence after an Al Jazeera investigation exposed how he and his former deputy coordinated the theft of millions of dollars from state coffers.

“Al Jazeera only saw the cash that entered my house,” Yameen told ruling party supporters on Monday. “Al Jazeera did not see anything else.”

Yameen, who assumed office in 2013, blames his former deputy, Ahmed Adeeb, for the giant embezzlement scheme.

He has previously said he was not aware the cash he received from Adeeb had been stolen, saying he believed it was gifts he had received from businessmen who supported him.

Secretly filmed confessions obtained by Al Jazeera show three of Adeeb’s associates explaining how they carried cash to the president and many politicians in the Maldives.

“For the president, it’s difficult to carry even,” laughed one as he described delivering black travel bags filled with cash of up to $1m to Yameen’s private residence, Dhoovehi.

The investigation also found Yameen’s ministers and aides plotted to launder up to $1.5bn through the Maldives central bank.

On Monday, Yameen said the stolen money was also spent on electing ruling party officials to the parliament.

“It wasn’t only Dhoovehi that the cash entered in boxes,” Yameen said in a speech broadcast on state television.

“At the time, there were some lawmakers we wanted elected. Ahmed Adeeb spent on them. The cash that entered my house was not halal. And if those lawmakers believe that, they must resign.”

Yameen’s apparent admission has caused an uproar in the Maldives, with the opposition calling for his immediate resignation.

Eva Abdulla, an opposition politician, said: “Stealing Paradise uncovered ample evidence of Yameen’s involvement in what has become the Maldives’ biggest ever corruption scandal. And now the president himself has admitted his guilt.

“This is enough evidence to prosecute him.”

The ruling Progressive Party of the Maldives issued a statement saying the president’s comments had been misconstrued and taken out of context.

Several legislators have now turned against Yameen and launched a bid to remove his ally, the parliament speaker, in a campaign to undermine the president before next year’s presidential election.

Adeeb was jailed last year for 33 years on terrorism and corruption charges.

The president and his deputy fell out of favour after an explosion on Yameen’s speedboat in 2015, which the police said was an assassination plot masterminded by Adeeb.

Yameen said on Monday he would recover the stolen money “to save” his reputation, adding that Adeeb could only be freed from prison if he returns the embezzled funds.

The embattled president is facing a coalition of four opposition parties, led by his brother Maumoon Abdul Gayoom, who ruled the Maldives with an iron fist for 30 years, and Mohamed Nasheed, the country’s first democratically elected president. 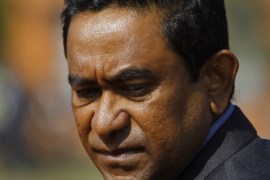 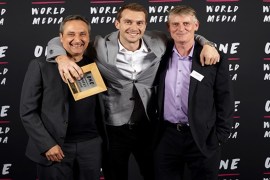