At least 175 people have died, and thousands have fled their homes as monsoon floods swept across Nepal, India and Bangladesh.

Three days of relentless downpours sparked flash floods and landslides that have killed at least 80 people in Nepal, 73 across northern and eastern India and 22 in Bangladesh.

Al Jazeera’s Subina Shreshtha, reporting from Janakpur in Nepal, said that at least six million people were affected by the floods in the country’s southern plains known as Terai.

More than 48,000 homes have been submerged by rising waters in Nepal, the police said.

In the eastern Indian state of Bihar bordering Nepal, several districts have been submerged by the overflowing rivers, affecting at least two million people, the IANS news agency reported.

Al Jazeera’s correspondent said that Terai is Nepal’s most fertile region and the economic toll is expected to be severe.

“Some 80 percent of the crops have been damaged. It’s going to have a huge impact in the long run for the country.”

This year’s flooding has been exacerbated by dams built on the India-Nepal border, she said.

“A lot of water that used to go to India has been blocked. So a lot of this damage has been man made.”

In the worst-hit areas of the southern plains, highway bridges have collapsed, and roads were blocked by landslides and floods, leaving thousands of travellers stranded, according to local media.

The Nepal Red Cross warned that shortages of drinking water and food could create a humanitarian crisis in the country of 29 million.

“In many parts of the country there is a scarcity of safe drinking water creating a high risk of health hazards,” spokesman Dibya Raj Poudel told the AFP news agency.

“Several villages and settlements are unreachable. Telecommunications, mobile phones are still not working so it difficult to give a full assessment.”

The Terai region has so far born the brunt of the monsoon, which typically lasts from late June until the end of August. More than 100 people have been killed so far.

In the northeastern Indian state of Assam, a second wave of floods within a month has killed 15 people over the last four days, a disaster services official said.

Nearly 2.3 million people have been displaced, stranded or suffered damage to crops and property, Kripal Mazumdar said in the state capital Guwahati.

Bangladesh deployed troops to shore up embankments in the north of the country, where flooding has killed 22 people.

Local government administrator Kazi Hasan Ahmed told the AFP that up to 700,000 people had been marooned by flood waters after rivers burst their banks following days of heavy rain.

In the Indian state of Himachal Pradesh, emergency workers were scouring the area hit by a massive landslide that swept two passenger buses into a deep gorge on Sunday, killing at least 46 people. 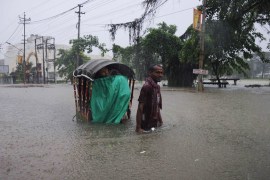 The region was devastated by prolonged downpours as recently as July. 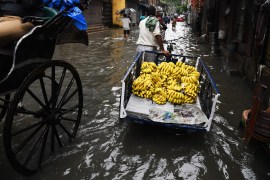 From wildfires, drought and heatwaves to extreme rainfall, the summer has been brutal in many parts of the world. 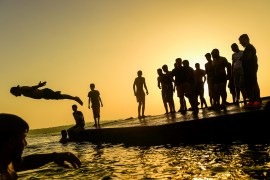 Week’s weather: From rivers to rhinos

Some of the best weather-related images of the last week.