At least one person was killed on Saturday and 35 injured as protests turned violent in Charlottesville, Virginia, as white supremacists clashed with counterdemonstrators and a car rammed into a crowd of anti-racist and anti-fascist demonstrators.

A 32-year-old female was among those killed in the car-ramming, said Charlottesville Police Chief Al Thomas, and injuries ranged from life-threatening to minor.

She was later named on social media as Heather Heyer and a fundraising page for her family has raised nearly $20,000, at the time of publication.

A 20-year-old man was held by police on charges relating to the car incident, including second-degree murder, according to police. The FBI opened a civil rights probe.

The Charlottesville Police Department said in a statement on Saturday night that James Alex Fields Jr of Ohio also faces three counts of malicious wounding and one count related to leaving the scene.

The Charlottesville City Council voted unanimously on Saturday to allow the police chief to declare a curfew. No action on the move has been taken yet, Charlottesville Mayor Mike Signer said on his Facebook page.

Earlier on Saturday, Signer confirmed on Twitter that at least one person had died in the car-ramming incident.

I am heartbroken that a life has been lost here. I urge all people of good will–go home.

The hospital in Charlottesville reported that at least 19 people were injured.

Pepper spray, batons and makeshift weapons were used as far-right demonstrators clashed with counterprotesters throughout Saturday.

Organised by Jason Kessler, a former journalist and a member of the Proud Boys, an ultra-nationalist group, the “Unite the Right” rally was planned to voice opposition to the removal of a Confederate statue and has been described as one of the largest white supremacist events in recent US history.

Writing on Twitter on Saturday morning, Virginia Governor Terry McAuliffe announced a state of emergency to “aid response to violence at the alt-right rally in Charlottesville”.

It is the third event of its type to be held in Charlottesville, a university town of 46,000 people, throughout the last four months.

Earlier this year, the city voted to remove a statue of Robert E Lee, the foremost Confederate military leader during the US Civil War, prompting similar far-right protests in May and July.

Among those in attendance are well-known figures such as Mike Peinovich, a white supremacist podcaster who also goes by Mike Enoch, and Richard Spencer, a leading figure in the alt-right, a loosely knit group that includes white supremacists and neo-Nazis.

The groups who sent members included the National Socialist Movement, the Traditionalist Worker Party, the neo-Confederate League of the South and Identity Evropa, among other white supremacist and far-right movements.

Emily Gorcenski, a Charlottesville-based activist, said that far-rightist activists made “threats, many promises of violence and incitement to violence” before Unite the Right.

“What we’re seeing is that they have no qualms about allying themselves with violent and hateful groups like the National Socialist Movement, the KKK and other [similar] organisations,” she told Al Jazeera.

Although city officials attempted to move Unite the Right from Emancipation Park, the site of the Robert E Lee statue, to another nearby park, a federal judge reinstated the group’s permit for the original venue on Friday.

The Virginia state police announced on Twitter that arrests had been made, but it did not specify how many people had been detained.

A police helicopter crashed and killed the pilot and a passenger later in the afternoon outside Charlottesville while en route to the rally, though officials did not elaborate the details.

On Friday night, hundreds of marchers descended on the University of Virginia carrying torches and yelling slogans “white lives matter” and “blood and soil”.

Others reportedly chanted: “You will not replace us.”

According to anti-racist and anti-fascist activists who were present, the far-right activists encircled and attacked a group of students who were holding a counterprotest.

Michael Payne, cochair of the local Democratic Socialists of America chapter, described Unite the Right as an “effort to intimidate the community”.

“Last night, the alt-right protesters initiated the violence … The neo-Nazis surrounded them with lit torches and started macing and beating the students,” he told Al Jazeera, explaining that police arrived after clashes started.

Police eventually intervened after clashes broke out and dispersed the crowd.

Payne said that local community organisations, church groups and the Black Lives Matter movement “have led the charge” in staging counterdemonstrations throughout the city.

After Friday night’s march, Kessler took to Twitter to celebrate the large turnout, describing it as a “incredible moment for white people”.

On Saturday, US President Donald Trump condemned the clashes in Charlottesville in a Twitter post. “There is no place for this kind of violence in America,” he wrote.

Far-right groups supported Trump’s campaign and celebrated his electoral victory last November, seeing common cause in his efforts to limit immigration and repeal affirmative action, among other policies.

Alexander Reid Ross, author of Against the Fascist Creep, explains that the Unite the Right rally was part of an effort to “shape the [far-right] movement as more serviceable populism”.

“What we’re seeing is Richard Spencer really attempting to get away from the sort of bickering that the alt-right has been involved in,” he told Al Jazeera, referring to recent disputes between various factions of the far right and militia groups.

Although the Oath Keepers and similar militia groups, most of which are pro-Trump, have publicly criticised the alt-right and groups like Identity Evropa for racism, they have shown up to several far-right protests to confront counterdemonstrators in recent months.

“They still say that there is a division that separates them, and that they’re against fascism and racism, but it’s clear that fascists are using these rallies to organise,” Ross said.

In a YouTube video, Spencer said: “There’s nothing more beautiful than a torch-light march.”

He added: “This movement is growing, and we’re occupying space and doing it symbolically.”

Unite the Right comes after months of increased clashes between far-right groups and anti-fascists.

Kim Kelly, a journalist and member of the Metropolitan Anarchist Coordinating Council, travelled to Charlottesville to attend Saturday’s counterdemonstrations.

“We’re at a pivotal point in American history, and in 10 or 20 years’ time, when our grandchildren ask us where we were when fascism came to America, some will say that they stayed home and waited for the next election,” she told Al Jazeera.

“But many of us will be able to say that we were down there on the barricades, fighting back. I know where I’ll be. Do you?” 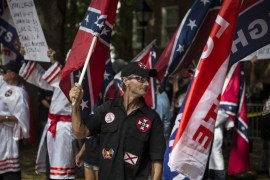