Antonio Guterres, UN secretary-general, called on defeated candidate Raila Odinga to “send a clear message to his supporters urging them to refrain from violence”, a statement on Saturday said.

Police opened fire to disperse protesters who blocked roads and set up barricades in the capital, Nairobi, on Saturday, a day after incumbent President Uhuru Kenyatta was declared the winner of the presidential poll.

Kenya is no stranger to post-election violence and scars still run deep from a disputed 2007 vote that led to two months of ethno-political clashes, leaving 1,100 dead and 600,000 displaced.

There were also riots in the opposition stronghold of Kisumu, where supporters of Odinga claim they have been robbed of victory.

A Kenyan human rights watchdog said at least 26 people have been killed in the post-election violence, while opposition leaders claim the death toll is much higher.

“We join the Kenyan people in mourning those who have died, calling on those with influence to exercise restraint at this difficult time to ensure calm, and to honour the Kenyans who turned out in such number to vote to determine their future,” he said.

Federica Mogherini, the European Union’s foreign affairs chief, also urged the opposition “to respect the results and to use legal means available for appeals and complaints”.

“Police have been trying to prevent demonstrators from coming to the city centre where most of the shops have been closed for days now. People have opted to stay away,” said Al Jazeera’s Catherine Soi, reporting from Kisumu.

Business owners and residents voiced their concern about the situation dragging on for too long.

“It’s a political situation which has brought everything to a standstill,” Kisumu resident Uno Philip told Al Jazeera.

Anger erupted on Friday night after Kenyatta was declared the victor by a large margin against his rival Odinga following an election pollsters had described as too close to call.

Kenya’s opposition has stood by its demand that the re-election of Kenyatta be overturned.

Odinga, 72, a mainstay of the Kenyan opposition since the 1980s, has been silent since his loss was announced.

In Nairobi’s Mathare slum, shops and markets slowly began opening and there was no sign of police or protesters on Sunday.

It remains unclear what the next move will be for Odinga’s National Super Alliance opposition coalition, but party leaders have said they will neither back down nor take their grievances to court. 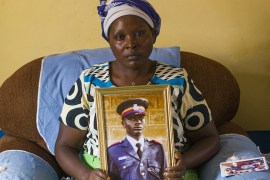 Communities are pitted against sand harvesters, powerful cartels and one another as demand for sand in Kenya grows.