Several Latin American nations have come out strongly against US President Donald Trump’s threat of military intervention to solve the ongoing political crisis in Venezuela.

In surprise comments on Friday, Trump asserted a “military option” could be considered, which Venezuela’s Defence Minister Vladimir Padrino slammed as “an act of craziness”.

“We want to express gratitude for all the expressions of solidarity and rejection of the use of force from governments around the world, including Latin America,” she said in a short speech.

President Nicolas Maduro and his government have faced strong criticism from several Latin American nations over the controversial Constituent Assembly, which has the power to rewrite the country’s constitution.

Firing back at Trump’s threat, Maduro’s son – speaking as a newly elected assembly member – said rifles would “arrive and take the White House” if Venezuela was “tarnished” by US military intervention.

President Maduro said Trump should solve his own problems and promised that – should the US attack Venezuela – the Vietnam War “would seem small in comparison”.

Peru, one of Maduro’s fiercest critics, led the charge in criticising Trump’s threat, saying it was against United Nations principles.

“All foreign or domestic threats to resort to force undermine the goal of reinstating democratic governance in Venezuela, as well as the principles enshrined in the UN charter,” said Peru’s Foreign Minister Ricardo Luna.

Mexico and Colombia joined in with statements of their own.

“All measures should be peaceful and respect the sovereignty of Venezuela,” a statement from Colombia‘s foreign ministry said.

OPINION: Why is Venezuela in crisis again?

Regional alliance Mercosur added it rejected the use of force against Venezuela, despite having indefinitely suspended the country last week amid international condemnation of Maduro’s new, all-powerful legislative superbody.

After four months of deadly protests against his government, Maduro says the assembly is Venezuela’s only hope of obtaining peace by locking in the socialist policies of his mentor and predecessor, the late Hugo Chavez.

“The mere suggestion is being rejected in a region with bitter memories of the days when the US marines were sent in to impose American interests in Washington’s so-called backyard,” she said.

Latin American support for Venezuela against the US threat comes on the eve of Vice President Mike Pence’s trip to the region beginning Sunday. He is set to visit Colombia, Argentina, Chile, and Panama.

Analysts say Pence will have his hands full in trying to gain political leverage in the region.

“So, I don’t think he has enough political clout to exert any kind of influence in Latin America.”

Navia added: “I don’t think any Latin American nation would support military invasion of Venezuela. What I think Pence wants to do is shore up support to remove Maduro through other means.” 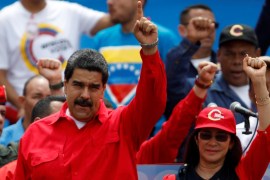