Five people have died in freak accidents as a result of violent storms in Poland. All the deaths were a result of falling trees in the area surrounding the Park Narodowy Bory Tucholskie, a national park of peat bogs, pine forests and lakes.

Deutsche Welle reported that rescuers had to force their way through “kilometres” of fallen trees in the Tuchola Forest to reach the site of Friday night’s tragedy.

A front of Atlantic air has forced itself into Spain, through the Alps, Austria and the Czech Republic, Germany and Poland. Hail the size of hens’ eggs fell in Spain. Flash floods raged through the Italian Alps, tombstones were felled in the Czech Republic but Poland may have seen the most dramatic effect on Friday night.

This particular storm appears to have been a mesoscale convective system (MCS), grown to such an extent that it produced destructive winds. An MCS typically creates a gust front or “squall line” that produces straight line wind damage.

Drone footage from northern Poland shows hundreds of shallow-rooted pine trees felled all in one direction. This is typical of a straight line blast of wind, not a tornado.

The city of Elblag, to the east of the national park, reported a sudden but short-lived increase in wind speed to 151 km/h before midnight. Lesser gusts, but equally sudden, and short-lived gusts were reported at Lebork and Chojnice.

The stormy worst is now over and the heat is starting to build again over a much quieter European plain. 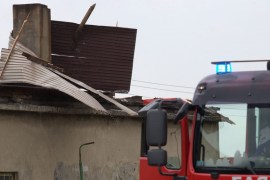