A renegade leader of Somalia’s al-Shabab has defected to the regional government, severing ties to the armed group that has been carrying out attacks in the country, according to a Somali military official.

Al Jazeera has learned that Mukhtar Robow has been airlifted to Mogadishu, after surrendering earlier on Sunday to Somali forces in the government-controlled town of Hudur in the country’s southwest.

Ahmed Mohamed, a senior government security official, earlier said Robow was taken from the Bakool jungle area, where he and hundreds of his fighters had been battling al-Shabab since early last week.

Al Jazeera’s Mohammed Adow, who had interviewed Robow, said the defection is significant as he is one of the founding leaders of al-Shabab, and is the only one living today.

READ MORE: US military sets sights on al-Shabab in Somalia

Earlier this week, Robow lost at least 19 of his fighters to al-Shabab, our correspondent said.

Robow’s defection comes after the United States in June cancelled a $5m reward offered for his capture.

His surrender is the culmination of months of talks between the Somali government, and it is believed the cancellation of the bounty for his capture helped convince Robow to turn himself in.

Robow, who was the deputy director of al-Shabab, is the most senior figure to have quit the group since its founding in 2001.

Falling out with al-Shabab

Estimated to be in his 50s, Robow is one of al-Shabab’s most experienced leaders, having travelled to Afghanistan and trained alongside al-Qaeda back in 2000 after studies in Sudan.

Robow had served as an al-Shabab spokesman, military commander and spiritual leader who planned and executed deadly attacks on Somali government troops and African Union peacekeeping forces, according to the US government.

Robow and al-Shabab parted ways in 2013, and since then he had been laying low in the jungles with his forces.

Al-Shabab had launched multiple attacks to try kill or capture him.

It was not immediately clear what would happen to Robow now that he has been captured. But residents and an analyst were doubtful over the impact of the move.

Mohamed Aden, a history lecturer at a Mogadishu University, told Reuters: “If criminals are not taken to court, then there will be no peace.”

Al-Shabab last year was named the deadliest armed group in Africa, with more than 4,200 people killed in 2016, according to the Washington, DC-based Africa Center for Strategic Studies.

The fighters pledged to step up attacks after the recently elected government of President Mohamed Abdullahi “Farmajo” Mohamed launched a new military offensive against it.

Al-Shabab also faces a new military push from the US after President Donald Trump approved expanded operations, including air attacks.

Al-Shabab has been fighting for years to try to topple Somalia’s central government and rule the Horn of Africa country according to their interpretation of Islamic law.

The fighters were driven out of the capital Mogadishu in 2011.

They have also since lost nearly all other territory they previously controlled after an offensive by Somali government troops and AU-mandated AMISOM peacekeepers.

Al-Shabab, nevertheless, remains a formidable threat and frequently carries out bombings both in Mogadishu and other towns against both military and civilian targets. 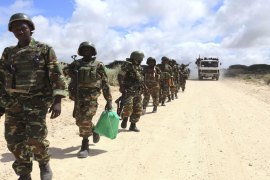 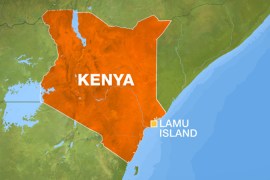