Armed attackers early on Saturday stormed an office of a Syrian paramedic group active in opposition-controlled areas, killing seven of its members and stealing two vehicles and other equipment in a northwestern region, the group and opposition activists said, while a suicide attack in the south of Syria killed at least 23 rebels.

The Syrian Civil Defence group, more popularly known as the White Helmets, said in a statement that the attack happened in the early hours in the town of Sarmin.

No one immediately claimed responsibility for the rare attack, but it came amid tension in the area. Sarmin is in Idlib province, which witnessed clashes recently between al-Qaeda-linked fighters and members of the ultraconservative Ahrar al-Sham group that ended with al-Qaeda fighters capturing much of the region.

The al-Qaeda-linked Hay’et Tahrir al Sham – also known as HTS – said over the past weeks that its members had discovered sleeper cells of the Islamic State of Syria and Iraq (ISIL, also known as ISIS) group who were planning an attack. The al-Qaeda affiliate, which was known as the Nusra Front, has fought deadly battles with ISIL over the past years.

The Britain-based Syrian Observatory for Human Rights said the seven were killed after being shot in the head, adding that the killings were discovered when volunteers from the White Helmets arrived to start a shift and found the bodies of their colleagues.

“Until now it is mostly likely a crime. It might also be an attack aimed to harm the image of the Nusra Front and to show that Idlib is not safe,” said Rami Abdurrahman who heads the Observatory.

An opposition activist based in Idlib who has been providing the Associated Press with information about the province for years said the attackers used pistols equipped with silencers, adding that people living nearby did not notice anything unusual.

The activist, who asked that his name not be used for fear of reprisals, said ISIL sleeper cells had been discovered in Sarmin. He added that most likely members of ISIL carried out the attack to show that Idlib is not safe.

The activist said the HTS-linked Judicial Committee is investigating the case.

Sarmin used to be a stronghold of the Jund al-Aqsa armed group that clashed with al-Qaeda last year before many of its members were allowed to head to areas controlled by ISIL, whom they are fighting now.

The Syrian first responders have been known to risk their lives to save people from the civil war, now in its sixth year.

The White Helmets emerged in 2013, working to rescue civilians in rebel-held areas.

They have since gained international renown for their daring rescues, often filmed and circulated on social media, and were nominated for the 2016 Nobel Peace Prize.

Although they work exclusively in rebel-held areas, they insist they are non-partisan.

Their detractors, including President Bashar al-Assad’s government and his ally Russia, accuse them of being tools of their international donors.

Elsewhere in Syria, a suicide attacker blew himself inside a training camp for the Army of Islam rebel group in the southern town of Naseeb, near the border with Jordan, killing more than 20 fighters.

The Observatory said on Saturday that the Friday night blast killed 23 and wounded 20, some of whom were in critical condition.

Ahmad al-Masalmeh, an opposition activist based in the southern province of Deraa, told AP that about 80 Army of Islam members were having dinner inside a tent when the suicide attacker walked in and blew himself up.

He said 30 were killed, 20 were wounded and six are still missing.

No one claimed responsibility for the deadly bombing, but ISIL has previously claimed such attacks. 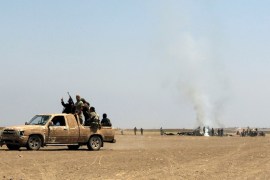 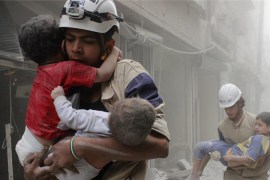