Kisumu, Kenya – A tense calm prevailed on Saturday in this stronghold of defeated presidential candidate Raila Odinga, a day after his defeat to incumbent President Uhuru Kenyatta was officially announced.

Running street battles between security forces and protesters unhappy with the results continued in several parts of the city of Kisumu for most of the night.

However, by sunrise clashes had whittled down to small groups of youths setting fire to tyres only to be chased away by the police.

Most shops in the city remained closed and some roads were still blocked by the leftovers of Friday night’s violence – rocks and burned tyres.

The slum of Kondele was one of the worst hit. There, opposition protesters accused police of using excessive force against them, including baton beatings and the firing of live ammunition.

They were using real bullets at us ... We did not have any guns.

Young men gathered on street corners still angry at the election results and their treatment at the hands of the security forces.

“They were even entering homes and beating people up,” Zaphania Onyango Juma, 29, told Al Jazeera holding an empty bullet case.

“They were using real bullets at us … We did not have any guns,” he added.

“They steal our votes and then they send soldiers to shoot us.”

One person was killed in Kisumu and another in Siaya.

Al Jazeera has learned that a third person, a 10-year-old child was also killed after being hit by a stray bullet in Mathare, a district in capital Nairobi.

Overall, there have been at least 24 people killed since the election on Tuesday, according to the Kenya National Commission on Human Rights.

The local hospital in Kisumu received five casualties, three of which had gunshot wounds, and the other two from beatings with batons.

Michael Oluoch, a 21-year-old, was shot in the thigh. “It was after 9pm. We were out and they [security forces] started shooting. One bullet hit me.”

Oluoch spoke to Al Jazeera while lying on a bed in the hallway of the hospital, a bloodied bandage covering the upper part of his leg.

In the next room, groaning in pain and unable to speak, was father-of-three David Okoth Maina, 34.

Maina, a water vendor, was shot in the ear and was waiting to be taken into the X-ray room.

“He was inside his house when he heard loud noises outside. He went outside to see what was happening and then he was shot in the ear,” his brother, Martin Otieno Maina, told Al Jazeera.

“He is in a lot of pain. We waited for him to be treated.”

Regional Police Commissioner, Wilson Njenga, said officers were enforcing the law and used “reasonable force depending on the threat.”

“Police were clearing the road and not going into homesteads. Police are patrolling the roads and protecting properties and we defend where there are threat to lives,” he said.

“Investigations will be done to establish if it was police or hooligans that caused the death of the person … Police are using tear gas and live ammunition is the last resort,” Njenga added.

‘They control the courts’

Observers have called on opposition leaders and those with grievances to go to the courts, but Odinga supporters say that will not help.

“They control the courts. We tried it last time. It is useless doing that,” John Omondi, 30, told Al Jazeera.

The neighbourhood of Obunga is a short drive from Kondele. The roads there were still blocked and angry young men gathered by the roadside.

“They were shooting at us. Firing tear gas and a police helicopter was flying above us most of last night,” Cosmus Omondi told Al Jazeera.

While the streets were empty on Saturday, police could be seen kicking down doors and entering buildings.

Amnesty International has warned the Kenyan authorities against using excessive violence against protesters.

“While the police should, of course, position their resources where violence and loss of life is likely to occur, officers deployed in the areas identified as violence ‘hotspots’ must not believe they have carte-blanche to use excessive force,” said Abdullahi Boru Halakhe, Amnesty’s East Africa researcher. 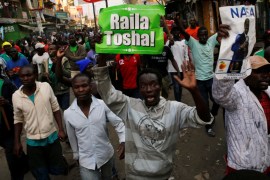 Why are Kenya’s elections so bitterly contested? 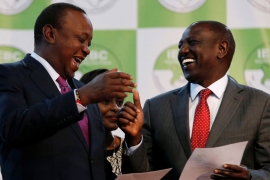