Venezuela’s President Nicolas Maduro has offered his hand to Donald Trump while expressing interest in direct talks after a new wave of US sanctions imposed on the troubled Latin American nation.

In his first address to the new, all-powerful Constituent Assembly on Thursday, Maduro instructed Venezuela’s Foreign Minister Jorge Arreaza to approach the United States and arrange a telephone conversation with Trump before next month’s United Nations General Assembly.

Maduro said he had also given orders, “if it can happen”, for a face-to-face meeting to be organised with Trump when heads of state and government from around the world gather in New York on September 20.

“If he’s so interested in Venezuela, here I am,” the socialist president said. “Mr Donald Trump, here is my hand.”

The remarks come a day after the Trump administration slapped new sanctions on eight of Venezuela’s politicians and security figures.

The sanctions will freeze US assets of the officials targeted, ban them from travel to the United States, and prohibit Americans from doing business with them.

These follow last month’s US sanctions on Venezuela over the election of a loyalist legislative superbody that has the power to rewrite the constitution, which Washington called  “illegitimate” and in service of a “dictator”.

OPINION: Will Brazil be the next Venezuela?

Despite expressing his desire for a strong relationship with the United States on Thursday, Maduro used substantial parts of his three-hour-plus speech lambasting the “imperialist” US for perceived actions against his government.

“We will never cede to foreign powers,” he said.

Maduro earlier accused Trump of backing a failed attack on a military base that killed two people in Valencia a week ago.

On Thursday, Trump said he discussed Venezuela along with North Korea and Afghanistan in a security briefing with top national security aides and Vice President Mike Pence, who travels to neighbouring Colombia on Sunday in a trip where discussions on how to pressure Maduro are expected to feature prominently.

“We had some very good meetings, some very good ideas, very good thoughts, and a lot of decisions were made,” Trump said following the briefing, without providing details.

Maduro and his government have faced growing opposition from the US and major Latin American nations over the controversial legislative superbody, which sparked months of deadly protests across the country.

Venezuela is suffering a severe economic downturn caused by low oil prices and government policies that have scared away private investment.

The country’s bonds are one of the few ways the current government is able to raise money to support its collapsing economy. 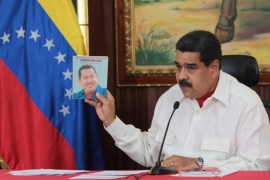 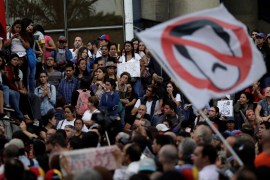 The Supreme Court handed down a 15-month jail sentence to David Smolansky as US slaps Caracas with fresh sanctions.