The UN has indicated is not responsible for controlling Yemen’s main airport, dismissing a call by a Saudi-led military coalition for the world body to do so.

The Saudi-led coalition fighting in Yemen asked the UN on Thursday to take control of the airport in the capital Sanaa, which is in the territory controlled by the rival Houthi fighters, Saudi state news agency SPA reported.

The coalition said it was ready to allow the reopening of the airport on the condition that the UN provided support for airport security.

It said the airport remained closed “due to concerns for the safety of civilian travel and commercial flights, as well as the smuggling of weapons by the Houthis”.

On Friday, UN spokesman Stephane Dujarric called on the rival sides to allow humanitarian aid access, including through Sanaa airport which has been closed to all but limited UN flights for a year.

“[The airport] is not under UN control,” Dujarric said on Friday.

“The parties to the conflict have the responsibility to ensure the protection of civilians and their access to humanitarian relief, including through the use of airspace and airport.”

UN agencies and aid groups have repeatedly called for the airport in Sanaa to be reopened to allow the delivery of desperately needed relief to the millions of Yemenis caught in the conflict.

Dujarric said he was unaware if the UN had received a formal request from the Saudi-led coalition for the world body to take control of the airport.

“We have been in contact with the government of Yemen and the Saudi-led coalition to advocate the reopening of Yemen’s airspace around the airport for humanitarian flights,” he said.

Yemen has been torn apart by a civil war in which the internationally recognised government of Abd-Rabbu Mansour Hadi, supported by the Saudi-led coalition, seeks to push back gains made by the Iran-allied Houthi fighters.

The Saudi-led coalition imposed an air and sea blockade on opposition-held territory in March 2015 and tightened it in August last year saying it was the only way to stop weapons smuggling.

In another Yemen-related development, the UAE’s official news agency confirmed late on Friday via Twitter that four Emirati soldiers were killed in an Apache helicopter crash after making an emergency landing during a mission.

Earlier, Colonel Turki al-Maliki, a spokesman for the Saudi-led coalition, said the helicopter “suffered a technical defect while returning from an operation in Yemen”.

The pilot made an emergency landing in a government-held area, “resulting in minor injuries to the crew”.

Residents of Shabwa province said another five injured soldiers were taken to hospital in Mukalla in the neighbouring province of Hadramawt.

Earlier this month, UAE-trained Yemeni special forces, backed by the US, launched a major operation against al-Qaeda, driving it from oil-rich Shabwa.

Al-Qaeda fighters are thought to have moved farther south into neighbouring Abyan province.

Late on Thursday, Nobel Peace Prize winner Tawakkol Karman accused Houthi fighters and forces loyal to Ali Abdullah Saleh, the former president of Yemen, of abducting her brother and two of his friends.

In a social media post, Karman, a journalist and activist who was one of the leaders of Yemen’s 2011 Arab Spring revolution that toppled Saleh, said the three men were “disappeared” in Sanaa last month.

“My brother Mohamed Abdul Salam and his two friends Omar Yaseen Abdul Aziz and Mohamed Kahla were enforced disappeared one month ago,” Karman, who was awarded the Nobel Peace Prize in 2011, said on Facebook.

She blamed security agents loyal to “the fascist coup alliance”, a reference to the Houthis and Saleh, who have established a transitional administration in Sanaa to rival the Aden-based Hadi government.

Mohamed al-Bakheit, a member of the Houthi political council, said he had no comment to make about the allegations.

“I have no information on the incident, so I cannot confirm or deny,” he told Anadolu Agency.

“We will comment in case we get information on that.” 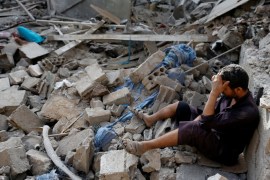 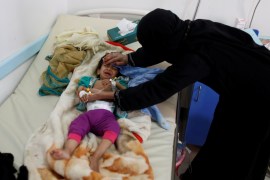 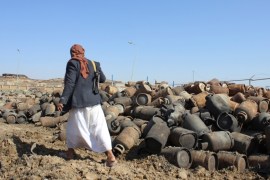