Doubling down on his war of words, US President Donald Trump warned Kim Jong-un’s government on Thursday to “get their act together” or face extraordinary “trouble”, and suggested his earlier threat to unleash “fire and fury” on North Korea was too mild.

“Maybe that statement wasn’t tough enough,” Trump said, in the latest US salvo in an escalating exchange of threats between the nuclear-armed nations.

A day after North Korea laid out plans to strike near Guam with unsettling specificity, there was no observable march toward combat, despite the angry rhetoric from both sides. US officials said there was no major movement of US military assets to the region, nor were there signs Pyongyang was actively preparing for war.

Trump declined to say whether the US was considering a pre-emptive military strike as he spoke to reporters before a briefing with his top national security advisers at his New Jersey golf resort.

The president insisted the North had been “getting away with a tragedy that can’t be allowed”.

“North Korea better get their act together, or they are going to be in trouble like few nations have ever been in trouble,” Trump said, flanked by Vice President Mike Pence. Accusing his predecessors of insufficient action, Trump said it was time somebody stood up to the pariah nation.

Though tensions have been building for months amid new missile tests by the North, the pace has intensified since the UN Security Council on Saturday passed sweeping new sanctions Trump had requested. The sanctions prompted the new heated volley of rhetoric.

In the latest move by North Korea, its military announced a detailed plan to fire four Hwasong-12 missiles over Japan and into waters around the tiny US territory of Guam, home to two US bases and 160,000 people.

North Korea said its military would finalise the plan by mid-August, then wait for Kim’s order. US allies Japan and South Korea quickly vowed a strong reaction if the North were to follow through.

Trump echoed that threat on Thursday, insisting if North Korea took any steps to attack Guam, its leaders would have reason to be nervous.

“Things will happen to them like they never thought possible, OK?” Trump said. He did not specify what they might be.

Guam lies about 3,400km from the Korean Peninsula, and it’s extremely unlikely Kim’s government would risk annihilation with a pre-emptive attack on US citizens.

It’s also unclear how reliable North Korea’s missiles would be against such a distant target, given that its military has struggled to target effectively in the past.

Mark Fitzpatrick, the director of the non-proliferation programme at the International Institute for Strategic Studies, told Al Jazeera that Trump had promised retaliation if North Korea “threaten” to attack Guam, whereas North Korea has threatened to send missiles towards Guam that would fall short.

“[Trump] seems to be talking about retaliating against a test. That would itself provoke a war that the United States would have started in that case,” he said.

Fitzpatrick said that North Korea will likely respond to Trump’s elevated threats by also ramping up their rhetoric.

“They will shout louder,” said Fitpatrick. “I think President Trump has challenged Kim Jong-un who now will feel compelled to follow through with a missile test.”

Trump said he would soon announce a request for a budget increase of “billions of dollars” for anti-missile systems.

But as it is, the US has a robust military presence in the region. Any order by the president could be executed quickly.

Current and former US officials said if war did come, the US and its allies would likely hit hard and fast, using air strikes, drone operations and cyberattacks aimed at military bases, airbases, missile sites, artillery, communications, command and control headquarters and intelligence-gathering and surveillance capabilities.

Key threats would be North Korea’s small but capable navy, including its submarines which can move quietly and attack. And Pyongyang also has significant cyber abilities, although not as sophisticated as America’s.

The North has also been preparing for ground war for decades, and would be a formidable force on the border.

“Do I have military options? Of course I do. That’s my responsibility,” Defense Secretary Jim Mattis said on Wednesday. But he said the Trump administration wants “to use diplomacy”.

To that end, Trump said he “of course” would always consider negotiations with North Korea, but added that talks have failed for the past 25 years.

US Secretary of State Rex Tillerson, in Asia this week, said North Korea could signal it was ready for such talks by halting any missile tests for an extended period.

Al Jazeera’s Mike Hanna, reporting from Washington, DC, said there had not been open rejection among Trump’s cabinet members to his position or rhetoric.

“Although some of his cabinet members are making a greater play about diplomacy than perhaps the president himself,” he said.

However, Hanna said there were misgivings among some Democracts in Congress, who sent a letter to the Secretary of State earlier on Thursday describing Trump’s actions as “dangerous” and asserting the constitutional requirement that the president must gain congressional approval before carrying out any pre-emptive strike.

“So now we’re seeing from a substantial body of members of Congress a constitutional point that President Trump can engage in as much rhetoric as he wants to, but in the views of these Congress representatives he needs to get the agreement of Congress before he can carry out the type of strike that he’s been hinting at,” said Hanna. 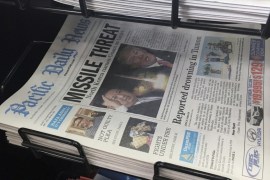 Guam’s governor has warned North Korea of any attacks on the US territory as war of words continues.

Korean People’s Army statement comes just hours after Trump said any threat to the US would meet ‘fire and fury’.