Human rights groups are calling on the Palestinian Authority to suspend a new “electronic crimes” law that limits freedom of expression online.

Social media and websites are one of the main outlets for debate and dissent in the occupied West Bank.

Critics say the clampdown allows his government to jail anyone deemed to have breached the new law.

However, a Palestinian prosecutor denied that the decree is being used to stifle dissent and insisted that a new law on electronic crimes was needed to close legal loopholes that in the past allowed offenders, such as hackers, to go unpunished.

Anyone found guilty of acts online that disturb what the edict calls “social harmony” faces up to 15 years of hard labour.

Rights activists say the decree was issued without prior public debate last month and is perhaps the most significant step yet by Abbas’ government to restrict freedom of expression in the occupied West Bank.

According to the Palestinian Center for Development and Media Freedoms (Mada), the government blocked 30 websites in the past month.

Most of the sites were affiliated with Abbas’ two main rivals – former aide-turned-foe Mohammed Dahlan and Hamas, Mada said.

A few of the blocked sites supported the Islamic State of Iraq and the Levant (ISIL, also known as ISIS) group.

Five journalists working for news outlets linked to Hamas were detained this week and charged with violating the new law, according to the lawyer of one of those arrested and an official in the association of Palestinian journalists.

Separately, four other journalists were called in for questioning about social media posts critical of government policy.

Ammar Dweik, head of the government-appointed Palestinian Independent Commission for Human Rights, said the new law is “one of the worst” since the Palestinian autonomy government was established in 1994.

It’s “a big setback to the freedoms in the West Bank”, he said, citing the vague definition of the purported crimes, the wide authority given to the security forces, the large-scale blocking of news websites and the harsh punishments.

The Associated Press news agency reported that officials in Abbas’ office declined to comment on the new decree or on long-standing complaints that Abbas and his government restrict freedoms in the West Bank.

A government spokesman also declined to comment to AP, referring questions to the justice minister, who did not respond to phone messages. 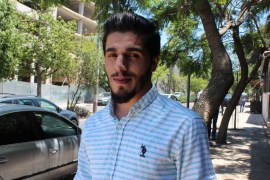 Dozens of Palestinians have been arrested in recent years for social media posts criticising the government.