Nine inmates are dead and 11 injured following a fight between prisoners at a jail in the northern Mexico border city of Reynosa.

Authorities in Tamaulipas state say rival groups of inmates fought with shanks, sticks and rocks in two parts of the prison.

The fight occurred on Thursday during family visiting hours. Guards fired shots to control the situation.

The state security Coordination Group said the fight appeared to have involved a struggle for control within the prison between two groups.

While it did not identify the groups, Reynosa has seen pitched battles between factions of the Gulf Cartel.

Last month, 28 inmates were hacked to death by their rivals at a prison in Acapulco, a resort town on Mexico’s Pacific coast.

The prison system in Tamaulipas, a state racked by the deadly violence of Mexico’s drug cartel wars, had already made bad headlines twice this year.

In March, 29 inmates escaped through a tunnel from a prison in Ciudad Victoria. And in June, seven people were killed, including three police, when officers stormed the same prison to regain control from inmates who had been stockpiling guns. 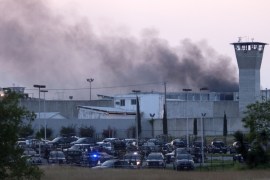