Franklin, the tropical cyclone that was briefly a hurricane, has mostly dissipated in the mountains of eastern Mexico in a mass of thunderclouds and flash floods.

It was identified and named as it approached the Yucatan peninsula from the east on Monday and deposited 160mm of rain on Campeche as it left to the west on Tuesday.

Over the warm waters of the Gulf of Campeche, it travelled westwards and increased in strength. Using the Saffir-Simpson classification, based on wind speeds, Franklin reached the strength of a category 1 hurricane.

Precautions were taken in the Mexican province of Veracruz. Fishing boats were brought up on to the streets and windows boarded as a protection against flying debris. Hurricane Franklin made landfall late on Wednesday in northern Veracruz with steady winds of at least 130km per hour.

As soon as a hurricane comes on to land, it loses its source of energy and starts to weaken. In eastern Mexico there are mountains reaching to 5,000m above sea level and this is where Franklin disintegrated into a mass of thunderstorms.

The settlement of Nautla suffered some wind damage to shanty constructions and large trees were brought down. Flash floods cascaded down the mountain slopes inland. Rainfall forecast models suggested a rainfall potential of 350mm or more and the mountains would have received most of this.

The city of Xalapa, state capital of Veracruz, is surrounded by mountains but still recorded 216mm of rain from Franklin’s thunderstorms. Most of this fell in the dark hours of Thursday morning.

Franklin has followed a similar course to Hurricane Debby in 1988. That too briefly reached category 1 before landfall. Debby regenerated off the west coast of Mexico over the warmth of the southern Gulf of California, although it then stayed offshore. It is entirely possible that Franklin will do the same thing. 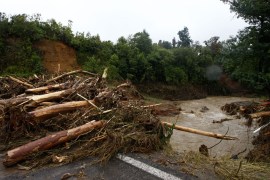