A prominent member of Hong Kong’s Democratic Party said he was beaten and “stapled” by Chinese agents in Hong Kong before being dumped on a remote beach.

Howard Lam, a key pro-democracy activist in the former British colony, told reporters on Friday he was confronted by men speaking Mandarin – spoken in Beijing but not widely in Cantonese-speaking Hong Kong – outside a sports store.

Lam said the men took him away, interrogating him and stapling his skin 21 times for being “unpatriotic” in a nine-hour ordeal.

He was knocked out and eventually found himself dumped on a beach in Hong Kong’s remote Sai Kung district.

Hong Kong’s police commissioner, Lau Wai-chung, told media he was taking Lam’s accusations seriously and they were attaching great importance to investigating the case. The Hong Kong and Macau Affairs Office of China’s State Council were not immediately available for comment.

The alleged attack comes as hostility to Beijing has spiralled in Hong Kong and the battle for full democracy has become a defining issue for the city of 7.3 million people.

Hong Kong became a “special administrative region” of China in 1997 and has been governed under a “one country, two systems” formula that guarantees a range of freedoms not enjoyed in China, including a direct vote for half of the 70-seat legislative assembly.

But activists say those freedoms have come under threat with perceived meddling by Communist Party rulers in Beijing.

In July, Hong Kong’s high court expelled four pro-independence politicians from the city’s legislature after invalidating their oaths of office, in what was seen as the clearest indication of direct intervention by Beijing.

Lam said he was even warned in a telephone call not to give a photo signed by Barcelona footballer Lionel Messi to the widow of Chinese dissident Liu Xiaobo, the imprisoned Nobel laureate who died from cancer last month.

Lam had previously said on Facebook the football star had sent him the photo for Liu, who was reportedly a fan. As it arrived after Liu’s death, Lam had said he would try to send it to his wife, Liu Xia.

It was not immediately clear how they knew of his plans to give her the signed Messi photo.

Chinese President Xi Jinping swore in Hong Kong’s new leader Carrie Lam last month with a stark warning that Beijing will not tolerate any challenge to its authority in the city as it marked the 20th anniversary of its return from Britain to China. 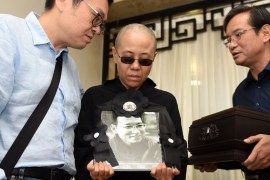 Liu Xia’s lawyer tells UN body that she has not been seen since the July 15 funeral and burial of the Nobel laureate. 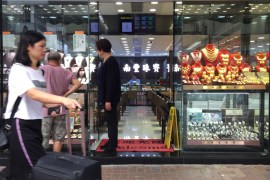 How a once sleepy Hong Kong border town became a site of anti-mainland sentiment and a hotbed of localism.