A passenger coach crashed into the wall of an expressway tunnel in China’s northwest, killing at least 36 people and injuring 13 others, official media reported on Friday.

The injured were sent to the hospital and rescue efforts were ongoing.

The accident occurred in Shaanxi province late on Thursday as the coach was on its way along the Xi’an-Hanzhong expressway to Luoyang, a city in central China, from Chengdu, the capital of the southwestern province of Sichuan, the Xinhua News Agency reported, citing the provincial police bureau.

More details were not immediately available, and it wasn’t clear if the coach was the only vehicle involved.

Minister of Public Security Guo Shengkun ordered a swift investigation into the accident, according to state broadcaster China Central Television.

Highway accidents are common in China because of high speeds, aggressive driving and a failure to leave adequate braking distance.

China does not release statistics on the total number of accidents each year, but the World Health Organization estimated in 2013 that around 250,000 people were killed on Chinese roads that year.

Beijing has vowed to clamp down on dangerous driving, but the rapid growth in car ownership and relatively lax checks on driving ability have made it difficult to curb the number of accidents, especially on rural roads.

Last month, 11 people died and nine were injured when a bus carrying 19 people collided with a lorry on a national highway in northern Hebei province.

Ten people were killed and 38 injured in March when a bus collided with a cement truck in the southwestern province of Yunnan.

At least 18 people were killed when a minibus plunged into a lake in the central city of Wuhan in December.

Last November, a pile-up on an expressway in the northern province of Shanxi killed 17 people and damaged 56 vehicles.

And in July last year, a coach crashed through a highway guard rail and plunged into a canal near the northern city of Tianjin, killing 26. 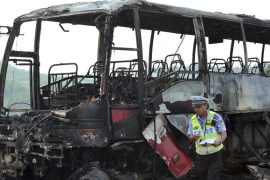 At least 35 people killed after bus crashes into barrier along highway in the central Chinese province, Xinhua reports. 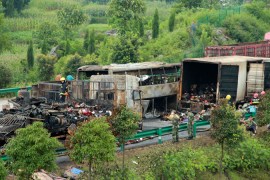