Anthony Scaramucci is out as White House communications director after just 11 days on the job – and just hours after former General John Kelly took over as US President Donald Trump’s new chief of staff.

Hoping to turn the page on a tumultuous opening chapter to his presidency, Trump had insisted earlier on Monday that there was “no chaos” in his White House as he swore in the retired Marine general as his second chief of staff.

Not long after, Scaramucci, who shocked many with his profane outburst last week against then chief of staff Reince Priebus, was gone.

“Mr Scaramucci felt it was best to give Chief of Staff John Kelly a clean slate and the ability to build his own team. We wish him all the best,” read a statement from the White House press secretary on Monday.

Scaramucci has been in the spotlight since he was first announced as communications director earlier this month.

The New Yorker magazine published an interview on Thursday in which Scaramucci went on a profanity-laden tirade against Priebus.

Kelly, a retired general and previous homeland security secretary, was sworn into his new job on Monday morning.

The statement about Scaramucci’s departure used the same “clean slate” language that departing press secretary Sean Spicer used to describe his own reason for resigning the day Trump brought Scaramucci on board.

White House spokeswoman Sarah Huckabee Sanders said in a news conference on Monday that all staff in the White House will report to Kelly.

“The president certainly felt that [Scaramucci’s] comments were inappropriate for a person in that position and [Trump] didn’t want to burden General Kelly with that line of succession,” she said.

She added that the decision for Scaramucci to leave was taken after a “mutually agreed conversation that took place between several people”, which included Scaramucci and Kelly.

Trump on Friday ousted Priebus as chief of staff and turned to Kelly, who he hopes will bring military discipline to an administration weighed down by a stalled legislative agenda, infighting among West Wing aides and a stack of investigations.

Scaramucci’s brief tenure shoved internal White House disputes into the open. In media interviews, he trashed Priebus as a “leaker” and senior White House aide Steve Bannon as a self-promoter. One of Scaramucci’s first – and it turns out only – acts was to force out a communications aide seen as loyal to Priebus.

Spicer, Priebus and Bannon had all objected to Trump’s decision to hire Scaramucci, who would have reported directly to the president.

‘A new sheriff in town’

Al Jazeera’s Kimberly Halkett, reporting from Washington, DC, said it was clear that “there is a new sheriff in town and we’ve already seen the first head roll”, but that apparent chaos at the White House was becoming a significant problem.

“It has been countering the message that it is in chaos. Donald Trump has been directly saying that that is not the case on social media, and even trying to highlight some of the successes with the economy at his cabinet meeting,” she said.

“But the appearances coming out of the White House are very different from the language being used by the president himself.”

READ MORE: Can Muslim politicians survive in today’s US?

Halkett said that many Americans are uncomfortable with several of Trump’s choices of staff, who tend to have either military or Wall Street backgrounds.

“There is a little bit of discomfort with Donald Trump boasting he wants rich people in charge and he wants generals in charge – that’s making some people nervous on both sides of the aisle, Democrats and Republicans,” she said.

“So while there might be a sense that there is some order being restored to – despite what Donald Trump is saying – a somewhat chaotic White House up to this point, there’s also concern about what that might look like moving forward,” she said.

Bill Schneider, a political analyst at George Mason University, told Al Jazeera that Kelly may instill more discipline among the White House staff but that Trump is not known for his self-discipline.

Schneider said that Kelly does not have a political background and does not know the world of Washington or New York very well, and its “very specific culture”.

“It’s bullying, it’s impetuous, it’s brash, it’s bragging – it’s all the things people have watched with dismay in the first months of the Trump presidency,” he said.

Schneider added that, while Kelly is likely to try to implement a chain of command to control the advisers around Trump so that they answer to him, it is not clear how effective that will be.

“I’m not sure that the president’s son-in-law is going to be able to abide by that, or some of the other people who were around Trump for a long time and were part of the campaign,” said Schneider. 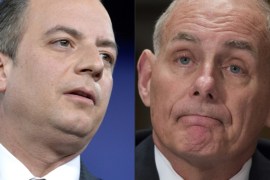 US president tweets that he has replaced Reince Priebus with homeland security secretary John Kelly as chief of staff. 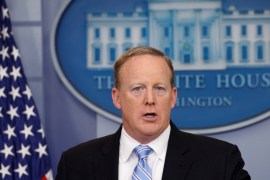 Press secretary steps down over Donald Trump’s naming of Anthony Scaramucci as his new communications director.