A defiant President Nicolas Maduro mocked fresh US sanctions against him after a disputed and deadly weekend vote in Venezuela to elect a new legislative body.

The sanctions came as electoral authorities said more than eight million Venezuelans voted on Sunday to create a constitutional assembly – a turnout doubted by independent analysts.

The election, which spurred unrest that killed at least 10 people, was labelled illegitimate by leaders across the Americas and Europe.

Maduro, however, said on Monday evening that he had no intention of deviating from plans to rewrite the constitution and lashed out at US sanctions, saying the move smacked of “imperialism”.

“Bring on more sanctions,” he told US President Donald Trump.

Meanwhile, two prominent opposition leaders who urged Venezuelans to join protests against Maduro were taken from their homes in overnight raids.

Leopoldo Lopez and Antonio Ledezema, who were both under house arrest, were picked up by intelligence services late at night, members of their families said on Twitter.

The opposition has vowed to continue protests.

Al Jazeera’s John Holman, reporting from Caracas, said Lopez and Ledzema’s arrests have raised fears of a crackdown on the opposition. In the run up to the vote, both men had posted videos online calling on Venezuelans to take to the streets, he said.

“Perhaps the government will say that violates the terms of their house arrest,” Holman said. “They were not supposed to express themselves publicly.”

Lilian Tintori, Lopez’s wife, said: “Maduro is responsible if something happens to him.”

Freddy Guevara, an opposition politician, said the arrests were aimed at “frightening us and demoralizing us”. Earlier in the day, he said the result of Sunday’s election was almost laughable “if it wasn’t a tragedy … if it didn’t mean more crisis”.

The National Electoral Council put turnout for the vote at 41.53 percent, a result that would mean the ruling party won more support than it had in any national election since 2013.

The opposition coalition estimated only 2.5 million ballots were cast.

Boycotted by the opposition, the Constituent Assembly was made up solely of members of Maduro’s ruling Socialist Party, including his wife, Cilia Flores.

Tasked with rewriting the constitution, it will have far-reaching powers, including the right to dissolve the opposition-controlled National Assembly and change laws.

It is due to be installed on Wednesday.

At least 120 people have died in four months of anti-government protests.

Colombia, Mexico, Peru and other nations joined the US in saying they did not recognise the results of Sunday’s election.

The White House labelled Maduro a “dictator who disregards the will of the Venezuelan people”.

Under the new sanctions, all of Maduro’s assets subject to US jurisdiction were frozen, and Americans are barred from doing business with him, the US Treasury Department said.

The financial impact of the new measures was not immediately clear as Maduro’s holdings in US jurisdictions, if he has any, are not publicised.

For the moment, the Trump administration has not delivered on threats to sanction Venezuela’s oil industry, which could raise US gas prices and deepen Venezuela’s humanitarian crisis. 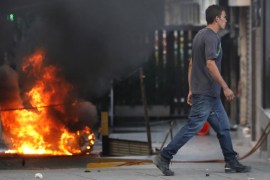