An 18-year-old girl has died in Nepal after she was bitten by a snake while banished to a shed because she was menstruating, under an ancient practice that has been banned for more than a decade, officials said.

Tulasi Shahi was bitten twice by a venomous snake and died on Friday morning in western Dailekh district, according to local officials.

Some Hindus view menstruating women as impure and in parts of Nepal they are forced to remain in a hut or cowshed for day as part of a practice known as “chhaupadi”.

According to local media, her family took her to the village shaman for treatment instead of taking her to a hospital.

Local police confirmed that a girl had died but were unable to provide further details on the cause.

Under the chhaupadi tradition, women are banned from taking part in normal family activities during menstruation and after childbirth, and can have no contact with men of the household.

Women who violate the practice are blamed for crop failures, illnesses and sudden deaths of animals.

Two women died in late 2016 in separate incidents while following the tradition. One of the women died of smoke inhalation after she lit a fire for warmth. The cause of death of the other woman has not been determined.

Rights groups say many other deaths linked to the custom likely go unreported.

Chhaupadi was banned more than a decade ago but is still followed in parts of Nepal, particularly in remote western districts.

READ MORE: ‘I was scared. But the fear of sin was bigger’

Pragya Lamsal, a development professional in Nepal who advocates against the chhaupadi practice, said the tradition is not a “cultural issue, but a human rights and legal issue”, adding that it “undermines a woman’s right to life with dignity”.

Lamsal also told Al Jazeera that although the practice has been banned, “menstrual taboos and chhaupadi traditions are still viewed as a private family issue”.

Proposed legislation that would criminalise the practice and make it an imprisonable offence to force women to follow the ritual is currently pending in parliament.

Lamsal said that although such “initiatives from government and non-govermental agencies to abolish the tradition are ongoing,” the government has remained “largely indifferent and has not put the issue as a priority”. 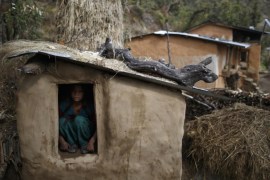 A 15-year-old girl suffocated to death after she was made to sleep in a shed because she was menstruating. 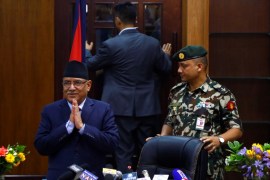 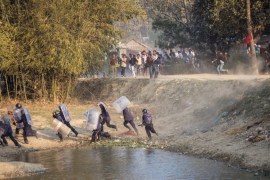