Fires burned across Hamburg for a second day as police and protesters clashed while the leaders of the world’s top economies met for the G20 summit.

Police said at least 196 officers have been injured in clashes, with 83 protesters temporarily detained at the scene and 19 taken into custody. Dozens of protesters have also been injured.

On Friday, the day the summit kicked off, some protesters torched cars and trucks, looted retail stores, lit off firecrackers and blasted music from Jimi Hendrix in a bid to drown out the classical music playing at a concert hall where world leaders met.

Thousands are protesting capitalism, climate polices and globalisation, among other issues.

Police used water cannon and tear gas to try to disperse protesters as reinforcements poured in from across the country to aid Hamburg police.

The protests marred a gathering that German Chancellor Angela Merkel had hoped would demonstrate her country’s unshakeable commitment to freedom of speech and assembly.

Participants in the G20 meeting praised the work of police in keeping the event safe but said they had never seen protesters closer to such a summit than in Hamburg.

In the touristy Pferdemarkt area, activists faced off against police in riot gear who were unable to put out fires, with billowing thick smoke dramatically reducing visibility.

In the nearby Schanzenviertel, a supermarket was ransacked and a cash machine was burned out. Several police helicopters patrolled overhead.

German Finance Minister Wolfgang Schaeuble cancelled an appearance in downtown Hamburg on Friday morning due to security concerns. Police also declined to clear US First Lady Melania Trump’s motorcade to leave her hotel for a tour of the city’s historic harbour, her spokeswoman said.

Marine police units intercepted 22 divers from the environmental pressure group Greenpeace who had also been trying to reach the concert hall, police said.

Meanwhile, US President Donald Trump and Russian leader Vladimir Putin, in their first face-to-face meeting, engaged in a “very robust exchange” over claims Moscow meddled in US elections, US Secretary of State Rex Tillerson said.

Tillerson said that the US president opened the discussion by pressing Putin about “the concerns of the American people regarding Russian interference in the 2016 election”.

The Russian president has continually denied any meddling in the US democratic process and Moscow has asked for proof that it took place.

Tillerson added that the “presidents rightly focused on how [to] move forward from what may be simply an intractable disagreement at this point”.

The two-hour meeting also covered a slew of global crises including the Syrian war, Tillerson said.

US and Russia also agreed on a ceasefire deal covering southwestern Syria during the talks.

“Let me characterise: the meeting was very constructive, the two leaders I would say, connected very quickly,” said Tillerson, adding that “there was a very clear positive chemistry between the two”.

Al Jazeera’s Dominic Kane, reporting from Hamburg, said the duration of the discussion indicated there were a number of items Trump and Putin’s agenda.

“Discussions ranged from Ukraine, the fight against terrorism and the involvement, if any, of Russia in the US presidential elections,” he said.

“It is clear that lots of issues were discussed and the standout element was the ceasefire deal in southwest Syria.”

She told leaders of the G20 economic powers that they must be prepared to make compromises as she worked towards a summit outcome that everyone present could accept.

Protests are expected to continue on Saturday. 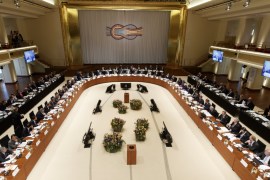