The US embassy in The Gambia has reversed its decision and granted visas for a high school robotics team to compete in an international competition in the United States.

On Monday, it was reported that the team, made up of five teenagers, were denied visas to attend the FIRST Global robotics event in Washington, DC on July 16-18.

However, in a second interview with the US embassy, all five students were given visas.

Fatoumata Ceesay, one of the engineering students, told Al Jazeera that although she and her peers weren’t told the reason behind the reversal of the decision, the second interview differed a lot from the first one.

“It was very nice and sensible compared with the last one,” 17-year-old Ceesay said. “The questions were related to the robotics. We had an interesting conversation and they were friendly.”

READ MORE: Music and poetry thrive in The Gambia post-Jammeh

The students are required to go back to the embassy next Monday to receive the official visa.

A spokeswoman from the embassy said that while they do not comment on specific visa cases, applicants who are found ineligible for a non-immigrant visa have the right to re-apply.

“Sometimes, in a second interview, they are able to present new or additional information or background details that allow them to overcome the presumption of immigrant intent that each consular officer is required to assume,” the spokeswoman said.

The students will have to travel without their mentor and coach, Moctar Darboe, who was not given a visa.

Darboe, who is also the Director for Science, Technology and Innovation at the Ministry of Education, said although he knew that that visa restrictions applied to government officials such as himself, he nonetheless feels great that the students now have the chance to go and represent their country.

“The [first interview] we weren’t even allowed to submit the vital documentation,” Darboe said. “The kids were asked one or two questions each. It was not detailed enough to give a definitive conclusion.

“This time, it was very thorough. The counselor said he was very convinced by the students, and said he was [granting the visa] not just for them but also for promoting STEM in The Gambia,” he added.

Darboe said that the funding of the trip was down to FIRST Global but he received news that they had run out of money.

However, a spokesperson for FIRST Global said that they will do their best to get the team to Washington, DC.

“FIRST Global has worked to support teams and with this new news, will work earnestly with Team Gambia to get them here,” said Jose Escotto.

For Fatoumata and her fellow students, they hope that being able to attend the competition to showcase their robot will motivate the youth in furthering their engineering careers and encourage the development of engineering as a whole in The Gambia.

“We are most looking forward to meeting new friends, seeing their creations, exchanging their ideas and exploring new innovations,” Fatoumata said.

The FIRST Global Challenge is open to students aged 15 to 18 from across the globe. Around 158 countries will be represented, including 40 African countries.

Only one other country was denied visas to attend. The all-girls team from Afghanistan is still seeking answers as to why their applications were rejected. 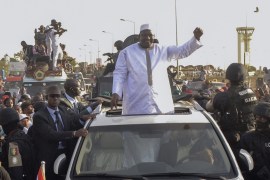 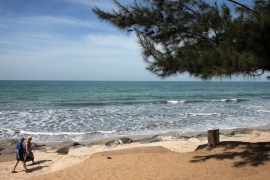 The Gambia: Reviving the tourism industry

Tourists stopped coming during the country’s electoral crisis, but the new government is hopeful good times are ahead.