Iraq’s Kurdish leader said that there was no turning back on a bid to achieve an independent Kurdish state, but he would pursue it through dialogue with Baghdad and regional powers to avoid conflict.

Masoud Barzani, President of the Kurdistan Regional Government (KRG), told Reuters in an interview on Thursday that the timetable for independence after a September 25 vote on the issue was “flexible but not open-ended”. He expected a “yes vote”.

The vote could turn into another regional flashpoint, with states with sizable Kurdish populations (Turkey, Iran and Syria, along with Iraq) all resolutely opposed to an independent Kurdistan in northern Iraq. But Barzani played down such fears.

Within Iraq’s borders, there is growing concern that the real purpose of the referendum is not secession, but to strengthen Kurdish claims over hotly disputed territory adjoining recognised KRG boundaries, such as the oil-rich region and city of Kirkuk, whose future has been in play for more than a decade.

At his palace in the hillside village of Salahaddin, Barzani said the vote would decide the fate of Kirkuk, which Kurdish Peshmerga forces prevented ISIL, also known as ISIS, from capturing in 2014.

“Whatever the people of Kirkuk decide within the referendum, that decision should be respected,” said a relaxed Barzani.

Barzani, a Kurdish nationalist who has long championed the rights of his people, said negotiations with Baghdad, neighbours and international powers would start immediately after the vote in order to reach an amicable agreement.

“Our main goal is to implement and achieve the decision of our people through peace and dialogue,” he said, wearing his traditional Peshmerga uniform.

Barzani accused the Shia-led Iraqi government, backed by Iran, of not sticking to a constitutional agreement of allowing the Kurds to have greater powers under a federal state set up after the US-led invasion that toppled Saddam Hussein in 2003.

“For 14 years we have been waiting and we have been discussing this partnership but we have always been told it’s not a good time and it’s not acceptable timing so my question is, when is the right time?”

The Kurds have been seeking an independent state since at least the end of World War I, when colonial powers divided up the Middle East, but their territory ended up split between modern-day Iraq, Syria, Turkey and Iran.

Saddam’s government waged the Anfal campaign against them in the 1980s, killing tens of thousands with poison gas in the city of Halabja.

Barzani said he was ready to allay the security concerns of Iraq, Turkey and Iran, saying that postponing independence would actually lead to greater instability.

“We have proved that we are factors of stability,” he said. “So what we do through a referendum is prevent that upcoming instability. We want to cut any possibility of bloodshed in the future.”

As the battle to recapture the Iraqi city of Mosul draws to a close, Barzani said victory is incomplete without a political reconciliation plan.

He accused the Iraqi government of failing to prepare a post-battle political, security and governance plan.

“I warned if you are not going to have this political plan, the situation will reverse.”

He said a high-level committee formed by the Kurdish region, the Baghdad government and a US-led military coalition to help Mosul leaders rebuild the city had never convened.

“I have big concerns about the situation in Mosul and about post-liberation, because the end of ISIL in Mosul doesn’t mean the end of ISIL. Those factors, the environment that brought it into Mosul, have not [changed].”

“I have a big concern about the future of the area. I hope I will be wrong.” 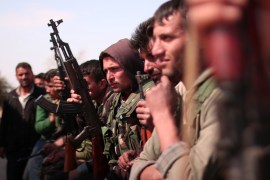 US arming of Kurdish fighters ‘unacceptable’

Responding to Trump’s move to send arms supplies to YPG in battle for Raqqa, Turkish official hopes US will ‘turn back’.